SALT LAKE CITY — After seven years of building, the Utah Jazz lost free agent Gordon Hayward to the Boston Celtics in what felt like a multi-year setback for one of the longest rebuilds in the current NBA. Hayward, just a rookie when the Jazz traded Deron Williams to the New Jersey Nets to bring back fellow rookie Derrick Favors and draft picks, was being primed to be the face of the team in the post-Williams era.

With Hayward becoming an NBA All-Star and a max contract player, the Jazz rebuilding plan came to fruition. However, when Hayward left for Boston, those seven years that saw the Jazz avoid skipping steps in the rebuild came back to spurn the team. Ultimately, whatever the Jazz had to offer Hayward was too little, too late for his liking.

With Hayward gone and Jazz fans trained to practice sometimes excruciating patience, the loss felt like the beginning of another long-view rebuilding plan.

I wouldn’t bet on it.

While Hayward had shown promise as a rookie, and the potential the Jazz acquired in the form of Derrick Favors appeared promising, the post-Williams Jazz never had a player as talented as the newest face of the team, Rudy Gobert.

Though Al Jefferson would go on to make an All-NBA team, and Paul Millsap would become a four-time All-Star, neither were difference-makers in the likeness of Gobert, who is arguably the league’s top defensive player, and made strides offensively last season. Gobert is under contract with the Jazz for the next four years, and, at 24 years old, he should be just entering his prime when this deal expires.

While the Jazz had both Hayward and Favors on rookie deals, the team could take a longer term approach to rebuilding. Gobert, now on his second contract, will be an unrestricted free agent at the end of his contract, free to leave for greener pastures, as Hayward did this summer. 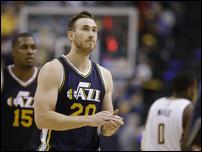 Ben Anderson: Gordon Hayward compliments, critiques Jazz on his way out the door

In a podcast with ESPN, Gordon Hayward discusses his decision to leave the Jazz, and how he arrived at his decision.

To keep Gobert happy, the Jazz would be wise to take a more aggressive approach to their rebuilding effort than they did when Williams was traded.

Luckily for Jazz fans, it appears the team has positioned itself to do just that.

Outside of Gobert, the Jazz have only Joe Ingles under contract beyond the 2019 offseason, freeing them to audition the remaining 15 players currently under team control to see how they fit into the long-term plans.

Going into the 2019-20 season, the Jazz will have only $36 million ($41 million including rookies Donovan Mitchell and Tony Bradley) in salary on the books. That should allow them to sign two players to max, or near-max, contracts that summer, should they avoid signing further long-term deals that stretch beyond that summer.

Additionally, with the current team structure, the Jazz should be free of any unmovable contracts over the next two seasons. Even with the team’s newest additions this summer, Jonas Jerebko, Ekpe Udoh and Thabo Sefolosha, the team is made up of mostly proven role players on affordable contracts. Outside of Alec Burks' two-year $22 million deal still owed, the Jazz shouldn’t have to add additional assets to any trade to rid themselves of a contract.

Perhaps most enticing for fans is the potential for the team to make a trade for a high-profile piece using a combination of young players, expiring contracts and draft picks. The Jazz wisely control all of their own future draft picks and could find themselves acting as dealmakers for teams looking to begin a rebuild by shedding proven players on long-term contracts. Or as a trade partner for championship-contending teams looking for short-term rentals of proven veteran pieces like Joe Johnson.

Regardless of the Jazz approach to rebuilding, with the current design of the roster and structure of future contracts, the timeline for returning to contention should be significantly abbreviated compared to the most recent iteration. While patience has long been the calling card of the Jazz in roster building, fans shouldn’t be surprised to see a more aggressive approach over the next two seasons.