WEST VALLEY CITY — A West Valley man who allegedly shot his neighbor during a home invasion, and was subsequently shot himself, has been released from the hospital and booked into jail.

On May 1 Kidder got into an argument about 3 a.m. with his mother and stepfather about his drug use inside the house, according to a Salt Lake County Jail report. Kidder allegedly punched his mother in the face and then was removed from the house.

Kidder broke a window to get back inside and then committed a sexual assault while threatening to kill the victim, according to the report.

Kidder then ran from his home and went about a block away to a house at 4158 W. 4400 South. Police believe the house was picked at random. 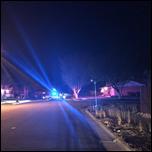 A homeowner and a suspected intruder were both shot during an early morning home invasion.

Another person in the house handed the homeowner a gun, the report states, but Kidder attempted to take the gun away and kill the two residents. As the two struggled over the gun, several shots were fired. Kidder was struck three times, police say. The homeowner was shot once. Both suffered injuries not considered to be life-threatening.

The homeowner's injuries were so minor that police didn't even initially realize he had been shot.