SALT LAKE CITY — Ground-level ozone is increasing in the American West, despite smog-busting domestic controls instituted over the past quarter century.

A new study concludes that an influx of pollution from Asian countries is swamping Yellowstone National Park and other parks in the West, fueled by Asia's tripling of ozone-causing emissions since 1990.

Published last week in the journal of Atmospheric Chemistry and Physics, the study was led by Princeton University and the National Oceanic and Atmospheric Administration.

Collectively, China, North Korea and South Korea, Japan, India and other south Asian countries have tripled their emissions of nitrogen oxide, a precursor to the formation of ozone. Ground-level ozone is harmful to human health, worsening asthma attacks and leading to difficulty in breathing.

Using ozone measurements combined with climate models developed at NOAA, researchers identified pollution from Asia as driving the climb in ozone in Western U.S. national parks in the spring, when wind and weather patterns push Asian pollution across the Pacific Ocean.

When the weather patterns subside in the summer, ozone levels in national parks are still above what would be expected given the U.S. reductions made in ozone precursors, the study noted.

Researchers mapped the sources of the air pollution to determine what is driving ozone formation at national parks, examining contributors like wildfires and global methane from livestock.

The study found that wildfire emissions contributed less than 10 percent, and methane from livestock was about 15 percent of the Western U.S. ozone increase, while Asian air pollution contributed as much as 65 percent. 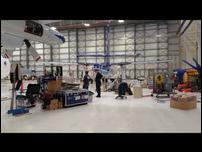 The National Oceanic and Atmospheric Administration will use sophisticated equipment to survey chemical conditions present when an inversion of PM2.5, or fine particulate pollution, exists.

In 2015, the U.S. Environmental Protection Agency lowered the federal threshold for ozone from 75 parts per billion to 70 ppb, setting off a maelstrom of controversy among states, industry and environmental groups that argued it was either too high or too low.

Areas above that standard will come under a classification of nonattainment slated to be made by the EPA by October.

Utah's expected trouble spots for summer ozone are on the Wasatch Front — Salt Lake, Utah, Davis, Weber and Tooele counties — and the Uinta Basin will be pegged for wintertime ozone, said Bryce Bird, director of the Utah Division of Air Quality.

Depending on the type of determination the EPA makes, Bird said those areas may have to come up with smog-busting solutions much like the strategies in place to fight PM2.5, or fine particulate pollution

Utah's regulators have joined multiple other states throughout the country in litigation arguing the lowered standard sets them up to fail.

The EPA had not fully instituted the 2008 standard for ozone in 2015 when it dropped the threshold even lower, leading critics to assert it is a futile effort to come into compliance.

In Utah, rural areas such as Canyonlands National Park had ozone levels that hover just shy of exceeding the threshold of 70 ppb standard, Bird said.

"There is no local mechanism to control that," Bird said. "Utah and other Western states have been working to determine the cause and contributors to background ozone. We have identified international transport as a component of what we are seeing here, especially in our rural areas of Utah."

The Princeton/NOAA study is unique in that it is one of the first research efforts that categorizes the extent to which rising Asian emissions contribute to U.S. ozone formation.

Bird said the Great Basin National Park that abuts Utah's border in eastern Nevada has high levels of ozone, but the nearest industrial source of precursor emissions is hundreds of miles away.

That quandary backs up the study's findings that a "global perspective" is necessary when designing pollution control strategies.

"We are only able to focus on what we can control locally," he said.