He hasn’t paid attention to the Olympics in Rio de Janeiro. He isn’t looking too far ahead at Arizona or archrival Utah or any other big game on the schedule.

And if BYU football is Sitake’s zone, LaVell Edwards Stadium is his sanctuary. His final game as a player was the day Cougar Stadium was renamed for his former legendary coach — a day he will always remember, treasure, and look back on with fondness.

“Every time I drive by the stadium, it gets me going,” Sitake said. “That’s just how it is for me. We’re excited to step on the grass and get this thing going. It’s a good feel being in this stadium, even though we’ll have to be used to being on the road for the first two.”

The former BYU fullback brought his current team to the stadium for its first scrimmage of fall camp Saturday morning. The event, which closed to the media and most of the public (save for a handful of cell phone-toting members of the Cougar Club), marks the formal end of the first full week of fall camp.

And by all accounts, the offense isn’t as far behind as the defense thought after a few skirmishes on the practice field.

“We’re starting to get there. But we’ve got a couple of weeks to go to really tighten it up,” offensive coordinator Ty Detmer said. “We’ve got to cut down on the penalties. We’ll be moving the ball, and then we’ll get a holding call or a false start. We just have to stay ahead of the chains.”

Having that back-and-forth between the offense and defense isn’t a bad thing, though, as Sitake was quick to point out.

“I would be really upset if one side was dominating the whole practice,” Sitake added. “You’re seeing some balance, and that’s a huge credit to the talent that was already here. There are a lot of good players with a lot of experience, and it’s expected that there will be battles between the offense and defense. “If one side dominates more than the other, we’re probably in trouble.”

Detmer’s pro-style offense is starting to click with the biggest players in the game, namely the quarterbacks. For sophomore signal caller Tanner Mangum, that’s a good thing; a few of the concepts that felt foreign to him are now becoming much more second-nature as he competes with fifth-year senior Taysom Hill for the starting job.

“Spring took me some time to get used to everything,” Mangum said. “But after spring and now one week of fall camp, I’ve got a good grasp of it. Now it’s just about getting more reps; that’s the key. Reps, reps, reps. Making sure we are developing good habits and understand all of our reads and our keys.

“As a quarterback group, we help each other out a lot.”

There is no Team Taysom or Team Tanner. No quarterback has emerged as the bona fide starter — or if he has, no one is telling.

“I think everybody knew what was going on beforehand, and I haven’t noticed any problems,” Hill said, before adding it would be nice to determine a starter before Sept. 3 at Arizona. “It’ll be nice to get more familiar with the guys you are going with on a consistent basis.”

Until then, no one is splitting off or dividing the locker room. The Cougars aren’t lacking in maturity or experience; even fifth-year senior running back Jamaal Williams — the former 17-year-old freshman phenom — has stepped into a role of mentorship amongst his position group. 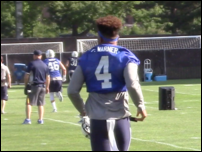 Team sports are thick with bonds — links forged between teammates, coaches and fans of a given team or school. For incoming BYU freshman Troy Warner, though, the “bond of brotherhood” is literal.

“These guys are grown men and they listen well,” Sitake said. “We took some huge steps forward as far as getting ready for the game. I was really pleased with what I saw.”

For now, an air of mystery enshrouds the program with a new offense, a new defensive structure, and a brand-new coaching staff.

But it won’t be that way for long.

“We’re in a unique position right now where not a lot of people know what is going on with us offensively and defensively,” Sitake said. “We’re more secretive now than we’ll ever be. I hope you guys can respect what we’re trying to do here.

“Once we get into the swing of things, we’ll start opening more up.”