Can the Jazz make a splash in the mediocre West?

SALT LAKE CITY — For several seasons, the NBA has been desperately lopsided. The Western Conference consistently outperformed the Eastern Conference in the regular season and the playoffs.

Since 1999, the West has won 12 of the last 17 championships, while consistently having better teams in the playoff picture from top to bottom.

But something has changed this season.

While the top of the West features the historically great Golden State Warriors, and as the Jazz saw first hand over the weekend, a dominant San Antonio Spurs team, and an always dangerous Oklahoma City Thunder team, the rest of the West is decidedly mediocre.

The Los Angeles Clippers, currently the No. 4 team in Western Conference, is five games above .500 but has suffered some tough-to-explain losses, including at home to the Jazz and the Houston Rockets. The Clippers have suffered through a 3-8 stretch this season that has them deeply entangled with the rest of the West despite their superior roster of talent.

The Dallas Mavericks are having a better-than-expected season with a revitalized Deron Williams and surprising contributions from Zaza Pachulia. They are firmly in the playoff chase, currently holding the fifth seed. Despite their ranking, they have an uninspiring 14-11 record and are just 5-5 in their last 10 games.

The Memphis Grizzlies currently have the sixth seed and are the last remaining team in the Western Conference with a record above .500. They are 8-6 at home and just 6-6 on the road, and like the Dallas Mavericks, just 5-5 in their last 10.

The Rockets are one of the league's most disappointing stories of 2015. After a surprising turn to the Western Conference playoffs last season, the James Harden-led Rockets fired Hall of Fame head coach Kevin McHale just weeks into the season, and though they've improve since, they still feature a sub-.500 record nearing the New Year.

Despite a current three-game slide, including a 37-point drubbing at the hands of the San Antonio Spurs, the Jazz would qualify for the playoffs if they started today.

It would be a big accomplishment for the Jazz to appear in the postseason, largely built through the interior growth of a young roster on a shoestring budget.

But the Jazz could go farther — a lot farther. 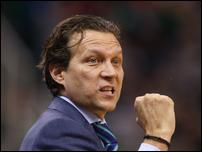 The Utah Jazz are on the road to making the playoffs

The West is largely wide open. While it's unlikely the Jazz get to a point where they're competing with the Thunder for the third seed in the West, they're only four games behind the Clippers for the fourth seed. They're only three games behind the Mavericks for the fifth seed, potentially setting up a first-round match up with the Clippers, who the Jazz handled earlier this season in Los Angeles.

Taking baby steps in the playoffs is not the worst way to gain experience. Other young teams, notably the Thunder, have gone from first-round exits to appearances in the NBA Finals over a three-year period. But the Jazz might not have that type of time.

Despite inking Gordon Hayward to a max contract last offseason, the Jazz are again facing free agency with Hayward after next season, essentially guaranteeing the Jazz only one full season with a line up of Dante Exum, Rodney Hood, Hayward, Derrick Favors and Rudy Gobert, assuming they are all healthy in 2016-17.

If the Jazz want to strike while the iron is hot, this year might be the fire that softens the iron.

With San Antonio's big three of Tim Duncan, Tony Parker and Manu Ginobili creeping further into the twilight of their careers, and the pending free agency of the Thunder's Kevin Durant, the West may truly see a revolution at the top of the standings over the next two seasons, and the Jazz can be one of the beneficiaries.

With potentially three starters still on rookie deals next year in Gobert, Hood and Exum, and Favors and Alec Burks on highly discounted contracts, the Jazz have the cap space to add talent, but first they have to prove why they're a destination with a bright future for potential additions.

It's hard to imagine an eighth seed doing it, but a fourth or fifth seed, with a roster of Hayward, Favors, Gobert, Hood, Burks, and Exum all under 25 years old, could make a compelling case on the free-agent market.

The Jazz have repeatedly said they won't skip steps, but taking advantage of unexpected situations, like the suddenly wide open middle seeds in the West, might present an opportunity for the Jazz to continue to develop internally, while gaining valuable playoff experience and improving themselves as a destination team for future free agents.

Making the playoffs would be a successful season for the Jazz and a clear sign of improvement. But with a fluid playoff picture from the fourth through the eighth seed, the Jazz must decide if having a successful season is enough, or if they'd be better served swinging for the fences.