The Utah Jazz are on the road to making the playoffs

SALT LAKE CITY — The Utah Jazz are on the road to making the playoffs.

On the road, the Utah Jazz are going to make the playoffs.

If that sounds confusing, it should.

The Jazz are going to make the playoffs this year, and it's because of how they're playing on the road.

If you've been a long-time Jazz fan, say since the end of the John Stockton and Karl Malone era, you'll understand that road wins have been hard to come by.

Since the end of the Jazz Hall-of-Fame era, and excluding this season, the team has been decidedly average. Having played 968 games in the wake of the two superstars, the Jazz have won 496 contests, or just 51 percent of their games.

However, the Jazz have been far better than average at home.

On the flip side, the Jazz have been downright mediocre on the road. In 484 road games, the Jazz have won just 182 contests, or 37 percent of their games.

One of the reasons for this discrepancy is the Jazz home court advantage due to altitude. As ESPN noted in 2013, both the Jazz and the Denver Nuggets, the NBA's two highest-altitude teams, perform decidedly better at home than their overall record would imply.

The discrepancy has drawn the eye of the NBA, as Chris Dempsey of the Denver Posted reported, league schedule makers are attempting to limit the number of games being played in Denver on the second night of back-to-back games.

It remains to be seen if the same attention will be paid to the Jazz when it comes to scheduling teams in similar scenarios.

This season, the Jazz are bucking the trend made familiar to fans over the last 12 years. Through 16 games, the Jazz are 8 and 8 on the season. At .500, the Jazz are a single percentage point off their average over the last dozen seasons. However, the home and road records look nothing like the traditional Jazz. 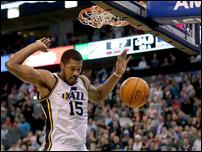 A look at the Jazz through 13 games, and whether or not Derrick Favors has done enough to emerge as the team's best player.

If the Jazz are to maintain their .500 winning percentage on the road, they'd finish with either 20, or 21 road victories on the season, a feat they've accomplished only twice since the retirement of Stockton and Malone. It was last completed in 2010 when the jazz finished with a 21-20 road record. The Jazz made the playoffs both seasons.

It's early to predict a playoff run for the Jazz, obviously. But with their current pace on the road — and historical advantage at home — the Jazz appear poised for their first postseason appearance since 2012.