SALT LAKE CITY — The NBA released the full 2015-16 season schedule on Wednesday, including the schedule of Utah Jazz.

The Jazz will open their season against the Eastern Conference on the road, beginning Oct. 28 against the Detroit Pistons and follow that with games on Oct. 30 and 31 against Philadelphia and Indiana.

The first home game of the season is Nov. 4 against the Portland Trail Blazers, led by former Weber State man Damian Lillard.

Overall, the schedule has a different feel than Jazz schedules of the past. There is no Christmas road trip this season. Instead, the Jazz will be home from Dec. 15-22. The Jazz will also have a home game on New Year's Eve, against Portland.

But making up for it is a road-heavy November schedule: eight of the Jazz's first 10 games are on the road, including a brutal four-game trip against Cleveland, Miami, Orlando and Atlanta.

The Jazz feature on national TV six times this season: three times on NBATV, twice on ESPN and once on TNT. The Jazz's final game of the season is April 13, against the Los Angeles Lakers. That game is on ESPN,and might be Kobe Bryant's final game.

Here's the day-of-week breakdown of the schedule, courtesy Utah Jazz: 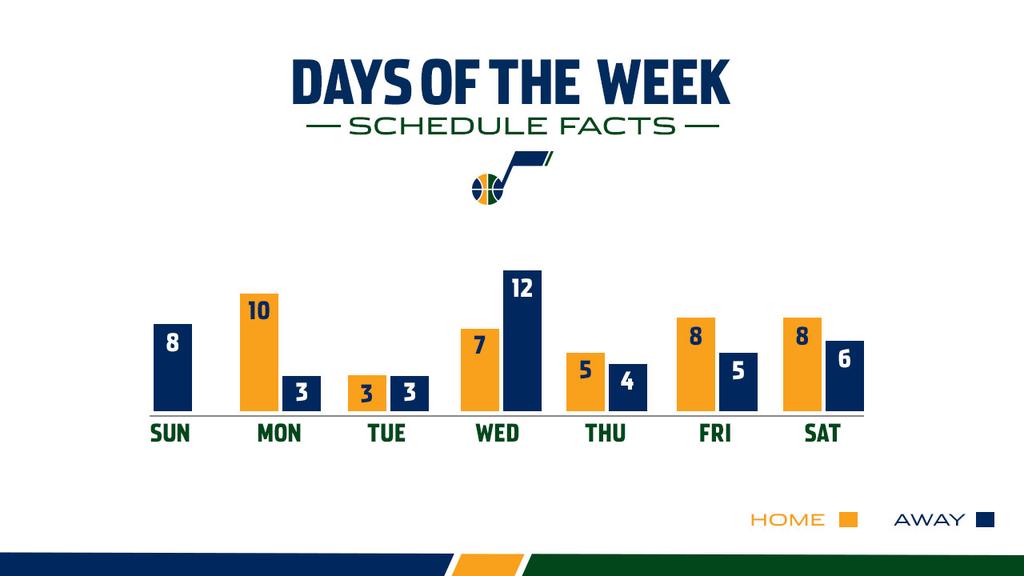 The full schedule is below: