WEST VALLEY CITY — The Utah Grizzlies dropped Game 5 of their series to the Ontario Reign Saturday night by a score of 4-0, eliminating them from the ECHL playoffs in the second round.

There was a brief glimmer of hope Wednesday night when the Grizzlies trimmed their deficit in the series to 2-1 with a 4-2 victory in the first of three straight home games, but it would be the team’s only win. The Reign responded with consecutive superior efforts to close the series out in five games, and will advance to the ECHL Western Conference Finals where they’ll play either the Allen Americans or the Tulsa Oilers.

Despite an influx of talent through a combination of injury returns and players who finished play in the parent AHL and dropped down a level to continue playing, the Grizzlies couldn’t quite get the job done against a more focused Reign group. Injuries played a part, with three important Utah forwards on the sidelines by the end of the series, but they were done in more by self-inflicted wounds.

Namely, the Grizzlies had major issues with discipline throughout the series, and as a result couldn’t stay out of the penalty box. Ontario had 30 power plays in five games, or nearly six per contest, and converted eight of these into goals for a blistering 30 percent success rate. 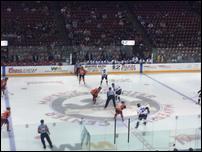 Grizzlies fall 4-2, pushed to brink of elimination in ECHL playoffs

The Utah Grizzlies lost 4-2 to the Ontario Reign Friday night at the Maverik Center, falling into a 3-1 series deficit that leaves them just a game away from elimination from the ECHL playoffs. (Photo: Ben Dowsett)

Meanwhile, when the Grizzlies earned a man advantage, they cashed in a paltry 9 percent of their chances. It’s easy to see how the discrepancy here made a big difference in a series only decided by a goal or two in several games.

Saturday’s action got started quickly with a series of big hits in the Ontario end resulting in a penalty to the Grizzlies’ Matt Pelech just a couple minutes in. The Grizzlies had most of the penalty killed, but a mostly innocuous wrist shot caught goalie Eric Levine — starting his first game of the playoffs after a couple successful relief efforts — badly out of position, and he served up a juicy rebound for Derek Couture to poke home and give the Reign an early 1-0 lead.

The teams traded unsuccessful power play chances after that, but the remainder of the period went without any further goals or significant events.

Neither group seemed to have excellent legs in the second frame, causing a number of penalties on both sides but little action on either goal. The Grizzlies were again less-disciplined, taking consecutive calls to put themselves at a five-on-three disadvantage. The Reign’s Matt Register took advantage, catching a cross-ice pass from Couture and firing a one-time slap shot that beat Levine to his right for a 2-0 Ontario lead, one that would hold through the end of the frame.

One might have assumed a high level of urgency with their season on the line in the final period, but the Grizzlies seemed to be out of gas. They mustered only a couple solid chances even despite a power play with just over three minutes left, including a span where they pulled goalie Levine for a two-man advantage.

Time ran out on the game, and the Grizzlies’ season, with an empty-net goal from nearly the full length of the ice from Ontario’s Alex Roach followed by another power play marker from Maxim Kitsyn.