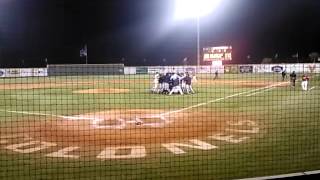 The right-hander from West Point via Northridge High School raised his hands high in celebration after throwing 102 pitches, striking out 11 Colonels in nine innings, and walking only two batters in leading BYU to its fifth straight win.

"Everything was working," Mahoney said after teammates piled on him. The recently-returned missionary topped out at 93 mph, but hovered around 90-92 throughout the two-hour game. "Give a shout out to (Jarrett) Jarvis, my coaches and our defense, it was sweet, just amazing.

"I could command my fast ball and my curve was filthy tonight, it was moving a lot, I could throw it for strikes, but my slider was my out pitch tonight. I started to feel it in the sixth or seventh inning. I knew it (the no-hitter) was definitely there going into the ninth inning and I wasn't going to go for anything less."

The Cougars, now 6-8, gave Mahoney plenty of support from their bats, including a pair of doubles by Brock Whitney, and gloves as they opened the four-game series at NSU.

Mahoney's teammates chipped in with key defensive plays a couple of times in the game to preserve the no-hitter. After Mahoney jammed a left-handed batter, left fielder Eric Urry did everything but dive to make the catch for the first out of the game. Right fielder Kelton Caldwell slipped and fell down on the soggy turf, then got back up to make one of his two catches in the seventh inning. And second baseman Trace Hansen ranged towards the first-base side and did a 360 spin to end the eighth inning.

Everything was working. Give a shout out to (Jarrett) Jarvis, my coaches and our defense, it was sweet, just amazing.

Jarvis put down a bunt single to load the bases in the sixth inning with no outs, extending his hitting streak to a dozen games. Then Hansen belted a two-run double down the left-field line to score Bret Lopez and Dillon Robinson. Brennon Lund drove in Jarvis with a sac-fly to extend BYU's lead to 4-0 before the inning ended.

"By the second or third inning you could tell he had the kind of stuff that he could do it," BYU coach Mike Littlewood said on the potential no-hitter. "But it wasn't until the sixth or seventh inning that it looked like it was going to happen. He (Mahoney) had great stuff, a fastball, curve ball and slider. He was throwing every pitch where he wanted. I didn't want to jinx him by getting guys up to throw in the bullpen. It was freezing. It was as cold as it was last Tuesday."

"Jarvis caught a great game," Littlewood said of his catcher. "He didn't drop a pitch all night and did a great job blocking it. Trent (Pratt) called the pitches. Overall, I'm happy with our approach. We had a lot of professional at bats tonight."

The Colonels (6-7) had only two base runners, both of whom walked in the fifth and seventh innings. Leo Vargas stole second base in the seventh in NSU's closest effort to score.

The Cougars and Colonels square off again in a Friday doubleheader beginning at 3 p.m. CST.