Cavemen lock down Brighton, advance to 5A semifinal 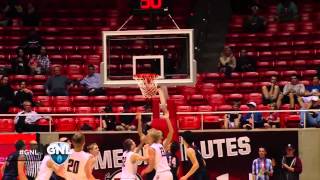 5A Quarterfinals Brighton vs American Fork

SALT LAKE CITY — When it all came down to it, it took old-school defense to win the first game of the 4A quarterfinal Thursday; so old-school, it was perfectly built for Cavemen.

The two teams were in a close defensive battle at halftime, with American Fork holding a narrow 21-17 lead. However, the Bengals’ offense fall apart in the third quarter, as Brighton didn’t score. Overall, Brighton shot 11.8 percent in the second half, while making 7-of-34 shots in the game.

American Fork advances to face Pleasant Grove in the 5A semifinal.

American Fork outscored Brighton in the paint (22-8), off turnovers (16-6) and on second-chance points (10-2). The Cavemen had four double-digit scorers, with Ryan Andrus leading the charge with 12 points. Brendan Bailey, Tyler Rawson and Spencer Johnson all chipped in 10 points for American Fork, and the team advances to Pleasant Grove at 7:30 Friday night at the Huntsman Center.

The fourth seed from Region Three, Brighton, which upset Region Two number-one seed Taylorsville in the first round, finishes the year with a 12-14 record. The Bengals were led in the game by Brock Miller, who scored 11 points.