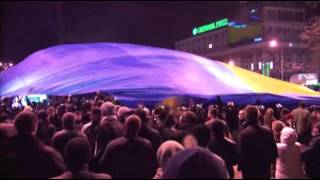 SIMFEROPOL, Ukraine (AP) -- Lawmakers in Crimea declared their intention Thursday to split from Ukraine and join Russia instead, and scheduled a referendum in 10 days for voters to decide the fate of the disputed peninsula. Russia's parliament, clearly savoring the action, introduced a bill intended to make this happen.

The Obama administration slapped new visa restrictions against pro-Russian opponents to the new Ukraine government in Kiev, and cleared the way for upcoming financial sanctions, as the West began punishing Moscow for refusing to withdraw its troops from the strategic region that also houses Russia's Black Sea fleet.

Ukraine's prime minister said the Crimean lawmakers' decision is illegitimate, as a European Union official warned that results of any referendum will not be recognized by the West.

The 100-seat parliament in Crimea, which enjoys a degree of autonomy under current Ukrainian law, voted 78-0, with eight abstentions in favor joining Russia and for holding the referendum on March 16. Local voters will also be given the choice of deciding to remain part of Ukraine, but with enhanced local powers.

"This is our response to the disorder and lawlessness in Kiev," said Sergei Shuvainikov, a member of the local Crimean legislature, "We will decide our future ourselves."

In Moscow, a prominent member of Russia's parliament, Sergei Mironov, said he has introduced a bill to simplify the procedure for Crimea to join Russia and it could be passed as soon as next week, the state news agency ITAR-Tass reported.

A senior Western diplomat said that the EU leaders, meeting in Brussels to discuss their response to Moscow's move, "will send a clear message that the referendum won't be recognized." The diplomat spoke on condition of anonymity because he wasn't allowed to discuss the leaders' closed-door talks publicly.

On Tuesday, President Vladimir Putin said Russia had no intention of annexing Crimea, while insisting its population has the right to determine the region's status in a referendum. Putin called a meeting of his Security Council on Thursday to discuss Ukraine.

A referendum had previously been scheduled in Crimea on March 30, but the question to be put to voters was on whether their region should enjoy "state autonomy" within Ukraine.

Crimea's new leader has said pro-Russian forces numbering more than 11,000 now control all access to the peninsula in the Black Sea and have blockaded all military bases that have not yet surrendered.

The West has joined the new Ukrainian leadership in Kiev in demanding that Russia pull its forces back from Crimea. On Thursday, the Obama administration slapped new visa restrictions on pro-Russian opponents of the Ukraine government, and cleared the way for upcoming financial sanctions, as the West began punishing Moscow.

The U.S. sanctions targeted an unspecified and unidentified number of people and entities that the Obama administration accuses of threatening Ukraine's sovereignty and territorial borders. They were announced in Washington as Secretary of State John Kerry headed into a meeting with Russian Foreign Minister Sergey Lavrov in Rome on the sidelines of a diplomatic forum about Libya.

In Brussels, European Union leaders were gathering to decide what sort of sanctions they can impose on Russia unless it withdraws its troops from Ukraine or engages in credible talks to defuse the situation.

"We need to send a very clear message to the Russian government that what has happened is unacceptable and should have consequences," British Prime Minister David Cameron said as he arrived at an emergency meeting of the bloc's 28 leaders.

But the European leaders appeared divided between nations close to Russia's borders and some Western economic powerhouses - notably Germany - that were taking a more dovish line.

Moscow has threatened to retaliate if any punitive measures are put in place.

Ukrainian Prime Minister Arseniy Yatsenyuk, in Brussels to meet with EU leaders, said Russia is continuing to stir up trouble.

"We ask Russia to respond whether they are ready to preserves peace and stability in Europe or (whether) they are ready to instigate another provocation and another tension in our bilateral and multilateral relations," Yatsenyuk said.

In Simferopol, Crimea's capital, about 50 people rallied outside the local parliament Thursday morning waving Russian and Crimean flags. Among the posters they held was one that said "Russia, defend us from genocide."

"We are tired of revolutions, maidans and conflicts and we want to live peacefully in Russia," said one of the bystanders, Igor Urbansky, 35. "Only Russia can give us a peaceful life."

Maidan is the name of the downtown square in Kiev where tens of thousands of protesters contested the rule of Ukrainian President Viktor Yanukovych, who fled to Russia.

Not all in this city favored the lawmakers' vote to secede from Ukraine.

"This is crazy. Crimea has become Putin's puppet," said Viktor Gordiyenko, 46. "A referendum at gunpoint of Russia weapons is just a decoration for Putin's show. A decision on occupation has already been made."

Svetlana Savchenko, another Crimean lawmaker, said the choice she and her fellow deputies took in favor of joining Russia will force Moscow to make a decision.

"This is our principled position," she told The Associated Press. "Now the Russian Federation must begin a procedure - will it take us in or not."

"At the present moment, a large, important group of specialists from Russia is at work, preparing to assure the entry of Crimea into the Russian Federation," Temirgaliev said.

At a news conference in Kiev, representatives of the Organization for Security and Cooperation in Europe returning from Crimea expressed concern the referendum might stir up new clashes and provocations.

"The situation might seem quiet, almost normal if you go to the streets," Tim Guldimann, the personal envoy of the Swiss OSCE chair, said. "However, it's extremely tense and I would consider this as a miracle that bloodshed could be avoided so far given the political and even military circumstances on the ground."

Under the Soviet Union, Crimea belonged to the Russian Federation until it was transferred to Ukraine in 1954 by Soviet Premier Nikita Khrushchev.

Concern that the turmoil could engulf eastern Ukraine grew after hundreds of demonstrators - many chanting "Russia! Russia!" - stormed a government building on Wednesday in Donetsk, a major industrial center near the Russian border.

Clashes between protesters and police broke out early Thursday in Donetsk as police cleared demonstrators from the regional administration center. The Ukrainian flag once again was hoisted over the building, and about 100 Ukrainian Interior troops could be seen in and around it. Two large trucks were parked in front to block the approach.

The European Union on Wednesday extended $15 billion in aid to help support the new Ukrainian government, which took over in late February after months of protests drove out Yanukovych, the Moscow-supported president.

The EU also imposed asset freezes against 18 people held responsible for embezzling state funds in Ukraine, including Yanukovych, his son and some of his closest allies.

Crimea's new leader, Sergei Aksyonov, said his government was in regular contact with the Russian officials, including those in a large Russian delegation now in Crimea.

Speaking at Crimea's government meeting late Wednesday, Aksyonov said the strategic peninsula is fully under the control of riot police and security forces joined by about 11,000 "self-defense" troops. All or most of these troops are believed to be Russian, even though the Russian president and defense minister have denied sending in the military other than those stationed at the home port of Russia's Black Sea Fleet.

Sergei Chuzavkov contributed from Donetsk, and Juergen Baetz from Brussels.

© 2014 The Associated Press. All rights reserved. This material may not be published, broadcast, rewritten or redistributed. Learn more about our Privacy Policy and Terms of Use.