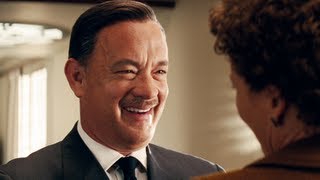 SALT LAKE CITY — The one word review for "Saving Mr. Banks" is charming.

Emma Thompson is simply wonderful as the cantankerous P.L. Travers, author of, "Mary Poppins." Tom Hanks delightfully delivers Walt Disney, who has wanted the film rights to the story for decades, recognizing its incredible potential for the big screen. He also promised his kids he'd make their beloved story into a movie.

Finally, desperate financial circumstances cause Mrs. Travers to even consider the deal. She demands to be involved in the screenwriting and only agrees to see how things go before she puts her signature on the final deal.

We find through flashbacks that the reason Travers is so protective of her story is that much of it is autobiographical. Colin Ferrell plays her charming but flawed father with whom she has a loving, fanciful but heartbreaking relationship.

Welcoming her to Burbank and the studios, Walt Disney pulls out all the stops, but nothing he does seems to please. To say she is curt, persnickety and even abrasive is a gross understatement. She is assigned the best people, the best writers, Walt's personal assistant is at her beck and call, and even the great Disney musical duo the Sherman Brothers are working on the score. By the way, B.J. Novak and Jason Schwartzman as Robert and Richard Sherman knock their roles out of the park; they are perfect.

I can't say enough about the supporting cast; especially Paul Giamatti playing the driver assigned to our prickly heroine. He is one of my favorite actors, and in this small but pivotal role, he shines.

This behind-the-scenes insight into the making of the classic films is a joy, but it's a little heavy for the kids.

To give you an idea of how difficult things get for Walt Disney, Travers doesn't want it to be a musical, doesn't want any animation, doesn't like Dick Van Dyke and insists that every single creative session be taped. As a matter of fact during the closing credits we're treated to some of the actual recordings.

Finally, it dawns on Walt Disney that she, regardless of what he does, is likely to reject the deal. But when the Sherman brothers introduce the song, "Let's Go Fly a Kite" and it shows the character, Mr. Banks, in a more sympathetic light, she starts tapping her toe. Could this be the breakthrough? Alas, it slips that Disney intends to animate the penguin scene and she flies back to London in a huff.

While Hanks doesn't much resemble Disney in appearance, he captures his spirit beautifully. Walt has somewhat of an epiphany and follows Mrs. Travers back to London, knocks on her door and has a sit-down heart-to-heart about his "daddy issues" and hers. It makes all the difference.

This behind-the-scenes insight into the making of the classic films is a joy, but it's a little heavy for the kids.

Once you see this film the title will actually make sense, although promotionally it's not that great. I like this film a lot. Three and a half stars for "Saving Mr. Banks," and it's rated PG-13.