NH man gets 35 to life for fatally shooting wife 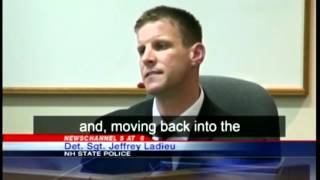 NEWPORT, N.H. (AP) - At the age of 12, Jill Perriello hid large kitchen knives in a toy box, fearing her father would use them to hurt her mother.

On Wednesday, now 14, she stood in a courtroom and read a letter to her father, James Perriello, before he was sentenced to 35 years to life for repeatedly shooting her mother in the head in a jealous rage. She recalled the night at their Grantham home that forever changed her life and those of her three younger brothers.

"I still hear them: The bangs, the booms, the crashes, the shouts, the words, the shots," she said as her father hung his head. "I see the way the air looked like it was blinking, the reds and blues that still cloud my mind.

"I still feel the chills that flow down my spine, the trembling bodies of my brothers as they snuggled against my body," she said, her voice even. "I remember the tears flowing and the world feeling submerged in water. I remember it all. The thing is, do you?"

James Perriello got the maximum sentence for killing 42-year-old Natalie Perriello, a popular teacher and finalist for New Hampshire's teacher of the year, after learning she was having an affair with a former student.

In a faltering voice, Perriello apologized.

"I had no right to take her away from her kids or her family and her friends," he said.

He showed no visible reaction when the sentence was delivered.

Most of those packed into the Sullivan County Superior Court stifled sobs and pressed tissues to their eyes as Jill spoke. A close friend and colleague, Lebanon High School principal Nan Parsons, provided insight into the fear and abuse that she said haunted Natalie for years.

Natalie fled with her children to Parsons' house one night two months before the April 26, 2012 killing, after Perriello had threatened to kill them all.

"She was apologizing, crying, saddened," Parsons said. "It was another night of unrest for Natalie. She shared her fear that James was going to kill her."

Parsons said she took Natalie Perriello to the police station the next day to apply for a restraining order, but that she couldn't go through with it.

"James had an emotional and physical hold on her that could not be broken," Parsons said.

Natalie Perriello's parents, Bob and Ann LaFlam, said they didn't know the extent of the abuse until after her death. "She wanted to protect us," her mother said. "I wish she had told us."

The LaFlams are raising the four children, who were ages 3 to 12 at the time of the shooting.

The day of the shooting, Perriello had hidden a digital recorder under the seat of his wife's car and recorded a conversation that he told police confirmed she was having an affair with a 20-year-old former student. That night, he kept going between his room at their home and hers, shouting accusations between sessions spent listening to the tape. She begged him to stop but he returned with a gun instead.

The first of eight shots lodged in a window frame above where 3-year-old Max slept in his mother's bed. The second shot hit Natalie Perriello's hand as she lunged for the gun. Perriello fired five bullets into his wife's head before calling 911.

Perriello, 42, pleaded guilty earlier this month to second-degree murder. His lawyers said Wednesday that he learned from the tape that his wife had funneled money his parents lent them to the young man she was seeing. The couple had gone to marriage counseling the day of the shooting, but the recording confirmed for Perriello that his marriage was doomed, they said.

"He was a person that had reached total rock bottom," lawyer Kim Kossick told the judge. She asked for a sentence of 18 to 36 years.