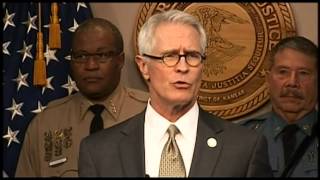 WICHITA, Kan. (AP) - The arrest of a Kansas man accused of trying to bring what he thought was a car bomb into a Wichita airport marked the culmination of a months-long undercover sting in what has become a successful and widely used domestic counterterrorism tactic.

Court documents detail Terry Lee Loewen's alleged conversations with undercover FBI agents over six months. The discussions began with vague sentiments about his desire to commit "violent jihad" against the U.S. before turning into a detailed, concrete plot in which the agents recruited him to use his airport access to plant a bomb in a martyrdom operation.

Loewen, a 58-year-old avionics technician who worked at the airport for Hawker Beechcraft, was arrested Friday on charges including providing support to al-Qaida and attempting to use a weapon of mass destruction. He remains jailed, and prosecutors expect to take their case to a grand jury Wednesday.

The case resembles a string of investigations conducted by the FBI since the Sept. 11 terrorist attacks that have prompted controversy over whether law enforcement's tactics involve entrapment and violate civil liberties.

One such case involved an undercover agent pretending to be a terrorist who provided a teenager with a phony car bomb, then watched him plant it in downtown Chicago. In Boston, a man was sentenced to 17 years in prison for plotting with undercover agents to fly remote-controlled planes packed with explosives into the Pentagon and U.S. Capitol.

The FBI insists the stings are a vital, legal tool for averting potentially deadly terrorist attacks _ and juries have returned tough sentences.

"If the fragile mental state of an otherwise upstanding individual is exploited to commit a crime that the individual otherwise would not have taken steps to commit, how does that make us safe and why spend taxpayer money on prosecution?" Monnat said Saturday.

"If that is what happened here, we have to ask ourselves: Is grooming terrorists the best use of our taxpayer money for security? If the person otherwise would never have taken further steps in furtherance of terrorism, what is the point?"

But entrapment defenses have failed in various cases. In a 2009 case in New York, a federal judge said she was not proud of the government's role in nurturing an alleged conspiracy in which four men were convicted in a plot to bomb synagogues and shoot down military planes with missiles. The men were each sentenced to 25 years in prison.

In an unsuccessful appeal, the defense argued the men were harmless dupes led astray by an FBI informant who infiltrated a mosque. With the encouragement of the informant, one of the men hatched the scheme to blow up the synagogues in the Bronx and to shoot down military cargo planes with missiles.

The appeals court found the government's tactics didn't rise to the level of "outrageous misconduct."

Court documents don't specify what initially led investigators to Loewen, though he allegedly told an undercover agent during one online exchange: "hey I read Inspire magazine; I believe in staying informed." Inspire, an English-language online magazine, is produced by al-Qaida affiliates. It includes such things as bomb-making instructions and endorsements of lone-wolf terror attacks.

U.S. Attorney Barry Grissom declined to discuss the case Saturday. But in May, he told students during an event at Wichita State University that authorities monitor extremists groups' websites, including Inspire magazine.

In Loewen's case, court documents paint an undercover operation in which Loewen and two FBI agents posing as conspirators ultimately hatched a plot to place a vehicle full of explosives at the Wichita airport. He allegedly timed it to cause "maximum carnage" and death, according to an FBI affidavit.

In early October, one undercover agent told Loewen he'd just returned from overseas after meeting with individuals connected with al-Qaida, and that the "brothers" were excited to hear about his access to the airport. When the agent asked if he'd be willing to plant a bomb, Loewen allegedly told him the plans were "like a dream come true for me, and I never expect things this good to occur in my life."

Over the coming months, he allegedly conspired with the agents. Loewen, who once claimed to know nothing about explosives, assisted an undercover agent assemble a bomb _ but with inert explosives _ using components he took from his employer. Two days later, an undercover agent picked Loewen up at a local hotel, went to another location to get the fake bomb and drove to Wichita Mid-Continent Airport.

Loewen was arrested early Friday as he twice tried to use his badge to gain entry to the tarmac.

In a letter dated Wednesday that prosecutors say Loewen left for a family member, Loewen said he expected to be martyred for Allah by the time the letter was read. He wrote that his only explanation was that he believed in jihad for the sake of Allah and his Muslim brothers and sisters, though he said most Muslims in the U.S. would condemn him.

"I expect to be called a terrorist (which I am), a psychopath, and a homicidal maniac," the letter said.

The Wichita Eagle newspaper, citing police, reported Saturday that Loewen has had at least one brush with the law, a concealed-carry violation at the airport in 2009.

Loewen has been described by a relative and a neighbor as a good person who largely kept to himself. His wife attended his initial court appearance Friday but refused to talk with reporters, as did his attorney.