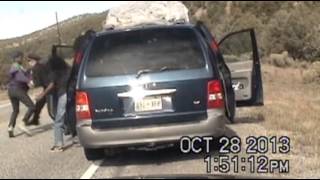 TAOS, N.M. (AP) - Lawyers for a New Mexico State Police officer who fired shots at a minivan full of children during a chaotic October traffic stop in Taos said he plans to appeal his firing.

Attorneys for Elias Montoya said Sunday they were reviewing the allegations against the veteran officer and intend to claim he was wrongfully terminated.

"One of the most dangerous situations is a traffic stop on a rural road with limited radio access," attorney Antonia Roybal-Mack said in the statement. "It is difficult to second-guess the actions of Officer Montoya without completely reviewing all of the evidence."

No one was hurt in the shooting that occurred while five children were in the minivan.

Under department policy, Montoya has 30 days to appeal his firing to the Public Safety Advisory Commission, which is made up of civilians appointed by the governor.

"You don't use deadly force against someone who is not threatening you with deadly force," said Martinez, a former district attorney whose husband is a retired law enforcement officer.

The governor said she reviewed video from a police cruiser's dashboard camera taken during the Oct. 28 traffic stop that showed Montoya shooting at the minivan as Oriana Farrell of Memphis, Tenn., drove away from a traffic stop after an officer knocked out her van's window with a baton.

The 39-year-old motorist had been stopped by another State Police officer for speeding. Authorities said she fled twice after that officer tried to give her a ticket and then arrest her.

After a chase that reached speeds of nearly 100 mph, Farrell and her teenage son were arrested in front of a Taos hotel. Farrell was released on bond and faces charges of child abuse, fleeing and misdemeanor possession of drug paraphernalia for a pair of marijuana pipes that authorities say were in the van.

According to a police report, Montoya later bought the entire family food from McDonald's during the booking process.

Montoya was fired Friday, following an internal investigation and a disciplinary hearing.

"We support him because of who he is and what he is to this community," Taos resident Ray Martinez told KRQE ( http://bit.ly/1bqOsHT).

Ray Martinez and other supporters said Montoya, who had worked for the department for 12 years, should get his job back, and Farrell should take most of the blame for endangering her children and others as she sped through the town.

Montoya's attorneys said their client was thankful for the support.

Others in Taos have complained that excessive force was used during the stop. Members of the group Citizens for Social Justice plan to meet with Kassetas this week to discuss the incident.