Tom Daley: Olympic diver reveals he is in a gay relationship 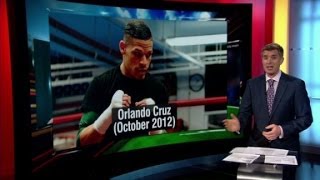 UNITED KINGDOM (CNN) — Tom Daley wanted the world to hear the truth straight from his mouth.

The 19-year-old diver, who was one of Britain's heart-throb poster-boys for the London 2012 Olympics, took to YouTube Monday to reveal he is in a relationship with a man.

After complaining that he had been misquoted in an interview over his sexuality, Daley recorded a five-minute clip before tweeting: "Got something I need to say...not been an easy decision to make, hope you can support me! :)."

In the short video, he said: "In spring this year my life changed massively when I met someone, and they make me feel so happy, so safe and everything just feels great.

"That someone is a guy."

Earlier this year, in September, the London 2012 bronze medalist was voted the world's sexiest man by leading gay magazine, Attitude.

While Daley has always been cautious in commenting on his private life, he felt the time was right to make the revelation after being angered by quotes attributed to him in a recent interview.

"One thing I consider to be pretty important is having a private life and you're probably thinking, 'Why did you do a book, why did you do a documentary?'" Daley said in the video.

"In an ideal world I wouldn't be doing this video because it wouldn't matter, but recently I was misquoted in an interview and it made me feel really angry.

Of course I still fancy girls. Right now I'm dating a guy and couldn't be happier. I feel safe and it really does just feel right. People are going to have their own opinions and I think people are going to make a big deal about this.

Daley said he has been dating the man for several months.

"It did take me by surprise a little bit," he said. "I did have in the back of my mind that something like that could happen.

"It wasn't until spring this year that something just clicked and felt right. My whole world just changed there and then.

"Of course I still fancy girls. Right now I'm dating a guy and couldn't be happier. I feel safe and it really does just feel right. People are going to have their own opinions and I think people are going to make a big deal about this.

"Is it a big deal? I don't think so. I wanted to say something and I feel like now I am ready to do it."

He has since go on to establish himself as a celebrity both in and out of the diving arena, gaining over 2.4 million Twitter followers and even having his own television show in the UK, called "Splash."

His life in the public eye has not come without its problems.

He also lost his father Rob in 2011 following a five-year battle with cancer.

But Daley says his announcement would not have been a problem for his father, although he does concede there have been "mixed opinions" within his family.

"People think: what would your dad say? He always said to me, 'As long as you are happy, I'm happy.' And right now I couldn't be happier.

"I told the rest of my family today, and let's just say they had mixed opinions. Lots of them did not believe it. Lots of them wanted me to keep it quiet.

"I didn't want to get my words twisted. I wanted to put an end to all the rumors and speculation, and just say it and tell you guys. It's what I want to do.

"My friends and family are always there to support me. And I hope you guys can be too. I mean I'm still Tom, I still want to win an Olympic gold medal in Rio 2016 for Great Britain. I am still as motivated as ever to do that. It would be great to have you guys on that journey, too."

Daley will now head to Houston, Texas, for the Team GB training camp until Christmas.

He follows other leading divers in making a public statement about their sexuality.

Australia's Matthew Mitcham announced he was homosexual before he won gold in Beijing, while four-time Olympic champion Greg Louganis came out as gay after quitting the sport in 1995.