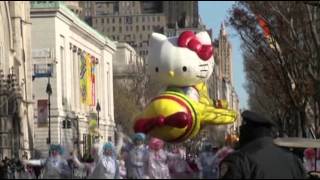 NEW YORK (AP) - The big balloons are soaring _ and so are the crowd's spirits _ as the annual Macy's Thanksgiving Day Parade makes its way through the streets of New York City.

There'd been some concerns about whether the wind could keep 16 giant balloons grounded on Thursday. But the parade went off without a hitch.

Balloon handlers were keeping a tight grip on their inflated characters. The wind was around 26 mph.

The cheering throngs were bundled against a 30-degree chill, but the sun was shining.

An excited 9-year-old Lily Thomolaris (tohm-uh-LEHR'-ihs) of Pittsburgh was excited to "see all the balloons." But she especially thought a big turkey was really cool.

THIS IS A BREAKING NEWS UPDATE. Check back soon for further information. AP's earlier story is below.

Snoopy, Spider-Man and the rest of the iconic balloons have gotten the all-clear to fly between Manhattan skyscrapers at the Macy's Thanksgiving Day Parade.

There were fears the balloons could be grounded if windy conditions from a storm that snarled holiday travel along the East Coast pick up. But the New York Police Department decided Thursday morning that the winds were calm enough for the 16 giant character balloons to lift off.

The iconic characters wouldn't have been allowed to lift off if sustained winds topped 23 mph and gusts exceeded 34 mph, according to city rules enacted after fierce winds in 1997 caused a Cat in the Hat balloon to topple a light pole and seriously injure a spectator. Balloons had only been grounded once in the parade's 87-year history, when bad weather kept them from flying in 1971.

A wet and blustery storm along the East Coast made driving hazardous and tangled up hundreds of flights Wednesday but didn't cause the all-out gridlock many Thanksgiving travelers had feared. The storm for the most part unleashed wind-driven rain along the Northeast's heavily populated Interstate 95 corridor from Richmond, Va., to the tip of Maine.

Elsewhere in the country, Thanksgiving traditions were unaffected by the weather.

In a holiday edition of his weekend radio and Internet address, Obama gave thanks for the country's founders, the generations who followed, and members of the military, and their families, for the sacrifices they make.

He expressed gratitude for the freedoms service members defend, including speech, religion and the right to choose America's leaders. And he had kind words for those who work to make America a more compassionate place.