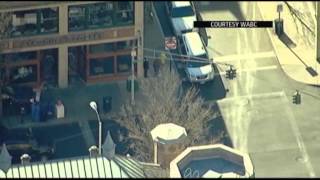 AP: Yale Campus on Lockdown After Call About Gun

NEW HAVEN, Conn. (AP) - Yale University was locked down for nearly six hours Monday as authorities investigated a phone call saying an armed man was heading to shoot it up, a warning they later said was likely a hoax.

SWAT teams searching the Ivy League campus didn't find a gunman after a room-by-room search, and the lockdown was lifted Monday afternoon. No one was injured, police said.

A 911 call was received at 9:48 a.m. from a man at a pay phone about a mile from the campus who said his roommate was on the way to the university to shoot people, Officer David Hartman said.

Esserman said he was leaning toward the incident being a hoax and a witness who reported seeing someone with a rifle likely saw a law enforcement officer.

"Though it is starting to tilt in the direction of an innocent mistake, it started with a purposeful and malicious call," Esserman said, vowing to track down and arrest the person who made the call.

Authorities don't believe that the caller was a Yale student or that his roommate attended Yale, Esserman said. There was nothing specific about the threat, he said, and the call lasted only seconds.

Classes aren't in session this week, and many students and staff members left campus for the Thanksgiving holiday following Saturday's traditional football game against Harvard.

But many students were still in their dorm rooms, Hartman said, and Yale authorities sent out their first warning about half an hour after the 911 call.

"The Yale police made the right call," Esserman said. "They went to immediate lockdown to keep everybody safe."

Yale advised students and staff members to shelter in place. It also issued an advisory asking people off campus to stay away. The shelter advisory was lifted by late afternoon.

Police blocked off several streets near the university's Old Campus, in the heart of New Haven, where they were concentrating their search. Several local schools also were placed in lockdown. Police in tactical gear entered several campus buildings. Pedestrian traffic in the normally bustling area was sparse, with cold and windy weather keeping many people indoors.

Police had difficulty gaining access to some rooms because those people locked inside weren't convinced they were dealing with law enforcement, he said. Most rooms don't have peepholes. Yale sent out an email telling community members that officers would be slipping a Yale ID under the door or using keys to gain access.

Yale has been the target of violence in the past. In May 2003, a bomb damaged an empty classroom and adjacent reading room at the law school.

A Yale professor, David J. Gelernter, was seriously injured in 1993, when a bomb mailed by Theodore Kaczynski, the man known as the Unabomber, exploded in his campus office.

Monday's search came several weeks after a scare on another Connecticut campus.

Central Connecticut State University was in lockdown for several hours Nov. 4 after reports by witnesses of a masked man carrying a gun or sword.

Police arrested a student, David Kyem, who said he had been wearing a ninja-like Halloween costume and meant no harm. He faces charges including breach of peace.