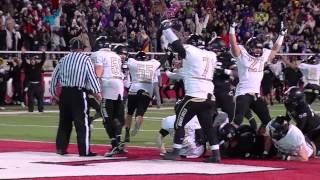 Desert Hills’ Landen Broadhead went in from 2 yards out in a tie game to give the Thunder the 3AA state title and a nice ride home, while the cross-town rival will have to take the long drive wondering what went wrong.

The two teams are so close most player shared hugs along the line at the end of the game. They knew each other so well that the game hadn’t been decided with 3 seconds left on the clock.

Broadhead took the handoff from Nick Warmsley and churned his legs.

“When everyone was picking me up that’s when I started realizing,” Broadhead said. “I looked over and the ref had his arms up. That’s when I knew we won state.”

Emotion was pouring from the players and the coaches for the Thunder of Desert Hills. Warmsley, the starting quarterback, wasn’t sure what emotions he was feeling as the crowd rushed the field and chanted “Thunder Family” and head coach Carl Franke took a minute away from it all to soak it in.

“I tell you what, you go up and down, up and down with these kids,” Franke said. “They drive you nuts, and I’ve said all along to the teenagers, I’m going to have a stroke at age 40. But it’s just believing in one another. Not getting too high or too low. Just playing together for the full 48 minutes.”

The wind and cold played terrible tricks on the ball as the teams moved up and down the field. The teams combined to throw six interceptions and the wind added a bit of drama as the Thunder went for the touchdown instead of a field goal for the win with time running out.

“We were talking about it, we were going to kick one, but we all decided we are going to take a chance on it, we’re going to get it in,” Warmsley said. “We’re going to work out butts off and we’re just going to get the ball in the end zone, and we did and it was awesome."

The sixth interception of the game set up the final drive. This one was the fourth thrown by Kody Wilstead, and the Thunder got the ball at midfield. Time was winding down, and Warmsley led the team down the field for the game-winning touchdown.

The scoring ended the way it started. Desert Hills took the first possession of the game 80 yards in 15 plays to go up 7-0. It ended with a 1-yard touchdown run by Broadhead. Broadhead had two touchdowns on four carries and a total of 14 yards for the senior.

The next score, which was by Desert Hills to go up 14-0, was a 37-yard pass from Warmsley to Braden Reber. Reber took the ball on a crossing route and turned up the sideline with some fancy footwork, but he scored because of a display of raw power as he bulled over Pine View defender Triston Duran at the 10-yard line.

Warmsley didn’t play the best game ever. He had 64 rushing yards and a touchdown on the ground along with 110 yards passing and a touchdown through the air. it wasn’t pretty, but it was enough.

After the fifth interception was thrown in the second quarter, Pine View got on the board. A four-play drive ended with Pano Tiatia getting in from a yard out.

Pine View scored 21 unanswered points. In the third, Wilstead connected with Bladen Hosner for a 49-yard pass to tie the game at 14. Hosner ended the game with 74 yards receiving on three catches.

Just before the last interception, it seemed like the Panthers had the momentum to get the game-winning score. Wilstead had just completed a 25-yard pass on 3rd-and-22 to extend the drive. Once again in 3rd-and-long, Wilstead lofted it up, but Jordan Hokanson came down with his second interception and set up the thrilling finale.

Wilstead threw for 332 yards and a touchdown, even though his fourth interception is what people will remember. His favorite target was Colton Miller, who caught nine balls for 114 yards.

A game of runs kept fans on the edge of their seats and emotions running high.