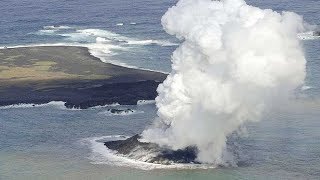 TOKYO (AP) - A volcanic eruption has raised an island in the seas to the far south of Tokyo, the Japanese coast guard and earthquake experts said.

Advisories from the coast guard and the Japan Meteorological Agency said the islet is about 200 meters (660 feet) in diameter. It is just off the coast of Nishinoshima, a small, uninhabited island in the Ogasawara chain, which is also known as the Bonin Islands.

The approximately 30 islands are 1,000 kilometers (620 miles) south of Tokyo, and along with the rest of Japan are part of the seismically active Pacific "Ring of Fire."

The coast guard issued an advisory Wednesday warning of heavy black smoke from the eruption. Television footage seen Thursday showed heavy smoke, ash and rocks exploding from the crater, as steam billowed into the sky.

A volcanologist with the coast guard, Hiroshi Ito, told the FNN news network that it was possible the new island might be eroded away.

"But it also could remain permanently," he said.

The last time the volcanos in the area are known to have erupted was in the mid-1970s. Much of the volcanic activity occurs under the sea, which extends thousands of meters deep along the Izu-Ogasawara-Marianas Trench.

Japan's chief government spokesman welcomed the news of yet another bit, however tiny, of new territory.

"This has happened before and in some cases the islands disappeared," Yoshihide Suga said when asked if the government was planning on naming the new island.

"If it becomes a full-fledged island, we would be happy to have more territory."

The Japanese archipelago has thousands of islands. In some cases, they help anchor claims to wide expanses of ocean overlying potentially lucrative energy and mineral resources.

Japan has plans to build port facilities and transplant fast-growing coral fragments onto Okinotorishima, two rocky outcroppings even further south of Tokyo, to boost its claim in a territorial dispute with China.