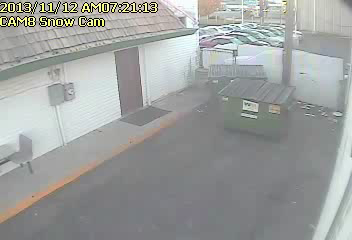 SOUTH SALT LAKE — Police are looking for a man who tried to break into a South Salt Lake sandwich shop.

The man didn't get away with anything from East Coast Subs at 3490 S. State but caused extensive damage to the store's back door. The man left dents in the door and handle, and broke the lock, police said.

Store owner Gary Marquez said he'd never had anything like this happen before.

"We've never had any problems in all the years we've been here," he said.

But that changed the Tuesday morning after Veteran's Day when Marquez got a call from the alarm company at 7:24 a.m. He showed up to find the back door heavily damaged but still shut tight.

The camera outside the business next door caught the would-be burglar in action. The footage shows someone pull up in a Range Rover — something that shocked Marquez.

A man got out of the SUV, checked to make sure no one was looking, then walked up to the door.

"The way he just knocked on the door, real casual, and then he pulled out the prybar from underneath his jacket, like he knew what he was doing," Marquez said.

The man tried to open the door with that crowbar, but didn't have much luck. He struggled — even putting his weight into it. The man worked on the door for a full minute before he gave up, walked back to his car and drove away empty-handed.

"He doesn't get away with nothing for all his effort, which he sure gave it a good effort to get in there," Marquez said.

The crime happened during the morning commute and just minutes before Marquez got to his restaurant. Police said it was a brazen crime in a flashy car.

"It's got a push bar in the front, roof racks on top, very expensive vehicle," said Lt. Gary Keller with the South Salt Lake Police Department.

Even if the burglar could have made his way into the restaurant, it would have been for nothing. Marquez said he doesn't keep money there overnight.

"He really wanted one of our sandwiches," he joked.

The Range Rover in the video has a temporary tag on the upper left hand corner of the rear window, police said. It appears the man may have done this before, and police said they're looking into whether he could be behind some unsolved break-ins.