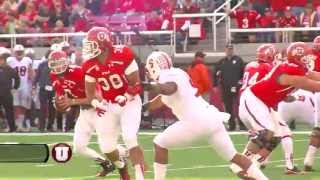 SALT LAKE CITY (AP) - Travis Wilson weaved his way through the sea of red, torn between retreating to the locker room and celebrating this signature win with the Utah faithful that had stormed the field.

Like he really had a choice, especially after the enthusiastic crowd lifted him up.

That's what happens after a quarterback helps orchestrate the biggest upset at home in school history and the most significant victory the Utah has had since moving to the Pac-12 three years. The Utes made a goal-line stand in the final minute and Wilson threw two TD passes in a 27-21 victory against No. 5 Stanford on Saturday.

It was the first time in school history the Utes (4-2, 1-2 Pac-12) have knocked off a top-five program at Rice-Eccles Stadium. They beat No. 4 Alabama in the Sugar Bowl following the 2008 season.

Not surprisingly, the fans rushed the field after the final gun. The ring leader? Defensive end Trevor Reilly.

The defense certainly did.

It was over when
The Utes stopped the Cardinal on the 2-yard-line. Kevin Hogan threw the ball incomplete and the Utes took over and ran the remaining clock out. Player of the Game
Dres Anderson touched the ball six times, four receptions and two rushes, producing 88 yards and two touchdowns.

Kevin Hogan marched the Cardinal down to the 6 with a minute remaining. On third down, he threw an incomplete pass to Charlie Hopkins. Then, on fourth down, amid heavy pressure, Hogan overthrew Devon Cajuste.

"They're good. They've always been good and we just weren't good enough," Stanford coach David Shaw said. "This is as well as I've seen Utah play on the offensive side. They really strung things together."

Utah kept Stanford's stingy defense off balance all day with a mix of draws and wide receiver screens. Dres Anderson caught a 51-yard TD pass and scored another on a short run. Bubba Poole finished with 111 yards rushing and had another 75 on seven catches.

Ty Montgomery returned a kickoff for a touchdown for a second straight week. This time, Montgomery took the ball a few steps deep in the end zone and darted through the Utes before going 100 yards, tying a Stanford record.

Cajuste made a diving catch on a fade route to trim the Utah lead to 27-21 with 9:22 remaining, but the Cardinal couldn't complete the comeback.

"It seems to be that our thing as a team this year is toughness," Reilly said. "I think that was personified there on the last stand."

A week after throwing six interceptions, Wilson showed more poise in the pocket. His only mistake was on a screen, when his pass was tipped and picked off by Joe Hemschoot.

Wilson finished 23 of 34 for 234 yards. He cut his throwing hand on a hard tackle early in the third quarter, continuously wiping the top of it on his towel. But the injury didn't seem to affect his touch. Neither did those interceptions.

"He's a resilient kid. Tough as nails," coach Kyle Whittingham said. "We had a feeling he was going to come back and play like he did tonight. Bottom line, he bounced back. He's got a lot of competitive spirit."

Utah showed its spunk, bouncing back from a close loss last week to UCLA.

Stanford struggled on offense in the second half, turning the ball over twice on fumbles with Reilly recovering both. The Utes turned those into field goals by Andy Phillips. Phillips, a former U.S. ski team member, is 11 for 11 this season.

Kevin Hogan dropped to 10-1 as a starter.

It was a week filled with controversy for Stanford after Washington coach Steve Sarkisian accused the Cardinal of faking injuries to slow down the tempo, leaving Stanford's David Shaw to vigorously defend his program.

That wasn't an issue. Stopping Utah in the first half was.

Utah went on a season-long 99-yard drive in the second quarter, culminating with Anderson's 3-yard score on an end-around. It gave Utah a 21-14 at halftime.

It was a day of firsts for the Stanford defense, which hadn't allowed an opening quarter TD all season until Saturday. Karl Williams scored on a 4-yard pass from Wilson on Utah's opening drive and Anderson later hauled in a 51-yard pass from Wilson. It was Anderson's fifth play of 50 or more yards this season.

Last week, Montgomery had a 99-yard TD return to open the game against Washington. Montgomery finished with three returns for 160 yards against Utah.

"Utah played their hearts out," Montgomery said. (Copyright 2013 The Associated Press. All rights reserved. This material may not be published, broadcast, rewritten or redistributed.)