UTAH COUNTY — Flooding in areas of Utah continued Saturday with the return of heavy rains.

The front of Herriman High School was flooded when a storm hit at around 12:30 p.m. The runoff from grain fields just west of the high school came across 6000 West.

There were about six inches of water and mud outside the building, said Jordan School District employee Scott Thomas.

Debbie Sorensen came with her husband and 18-year-old son to help clean up the wet mud at the school.

"It is crazy how much there is and how wet it is," Sorensen said.

Water seeped into the building as well, with as much as three inches in some areas, they said. There is wet carpet and damage to some band equipment, but they said they hope everything will be salvageable.

At 4 p.m. the water level had abated and crews were working on cleanup efforts. Mecham said it did not appear that the flooding would impede classes from being held Monday morning.

"It really helps to have the volunteers," Thomas said. "It's just a great community effort to see everyone come out."

"It came in like it was coming out of Niagara Falls," said resident Dottie Luttrell. 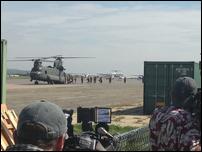 The Chinook helicopter landed, the hatch opened and about 20 school children walked out the back.

Luttrell said there was so much water it was above her ankles.

One woman who lives on the bottom floor said she got about four to six inches of water in her apartment. She had help getting all her stuff off the floor but will be staying with relatives tonight.

Between 50 and 75 volunteers worked Saturday to prepare sandbags in the area in the event of future flooding, Mecham said, and the Red Cross assisted apartment owners who had been displaced.

"The level of water has plateaued," the captain said. "The only thing we're worried about is Mother Nature throwing us a curveball and having more water come down."

The Red Cross was providing help as needed but not planning to open a shelter for displaced residents, spokesman Scott West said. He said the apartment complex had been working to help those whose homes were damaged by the water.

"We will be supplying cots and other things they need," West said.

Just over the town line from Herriman, flood water entered the basements of 11 homes in the Sunstone subdivision at 11800 South and 5900 West, said South Jordan's associate director of Public Works, Aaron Sainsbury.

Roughly 125 volunteers assisted in diverting water and preparing sandbags, Sainsbury said. He was not certain of the extent of the damage to the 11 homes but said they had been hit by several inches of water, enough to saturate carpet.

Crews were working to drain retention ponds in the area in anticipation of continued rain and planned to pump water out of the subdivision until late Saturday night.

"If we get any more rain, then we want to have a little bit of a buffer in the ponds," he said.

It came in like it was coming out of Niagara Falls.

In West Jordan, all southbound lanes of the Mountain View Corridor were closed Thursday afternoon near the Old Bingham Highway as the Utah Department of Transportation worked to drain retention ponds in anticipation of flooding.

West Jordan Fire Battalion Chief Clint Peterson said between six and 10 apartments were flooded at the Willshire Apartment complex at 9200 South and 6400 West. The area had seen minor flooding Friday night, but flood waters ultimately overwhelmed the sandbagging and trenching efforts put in place there.

"Apparently during that process of damming things up, the dam broke due to the pressure of the water and it caused a lot of major flooding this time," Petersen said. "We’re doing what we can. We’ve got boulders, we’ve got weeds, sticks, everything in apartments right now."

Saturday's flooding was among the most severe Peterson has seen in West Jordan. Days of wet weather had saturated the ground, he said, leading to flood areas that passed through fields picking up dirt and debris.

KSL meteorologist Lynae Miyer said there will likely be lingering showers into Sunday morning, but then a new drier and warmer weather system is expected to enter the state.

"I think by (Sunday) night we should be done with the rain, but we could see some (Sunday) morning," Miyer said. "We're dealing with the worst of it now, but it's only going to get better."