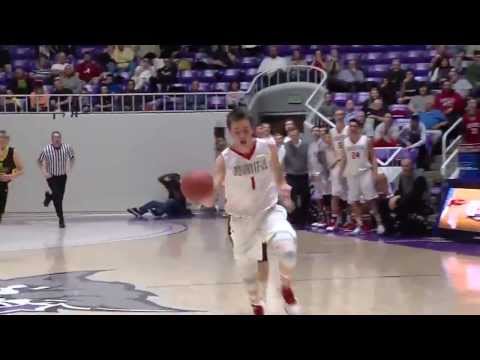 In an interview this morning, Seljaas told me he notified Rose over the phone on Sunday, and that the coach "was excited and happy."

"There was a lot of thinking and a lot of talking with other people about different schools," said Seljaas about the decision process, "but I have just always wanted to commit early, just so I could get it out of the way, and focus on my high school season and AAU. I just knew that BYU was the right place."

"I just felt great, and I just knew it was right and was happy about it."

Seljaas' offer list was certain to grow after a solid sophomore season for Bountiful was followed by headline performances during the summer AAU slate.

Already holding early-June offers from Utah State and BYU, Seljaas went to Las Vegas in late July with his Utah Prospects squad for the "Fab 48," and had an outstanding week, making 15 three-pointers in a two-game stretch--highlighted by an 8-for-9 performance behind the arc in an overtime quarterfinals win. After leading his team to the tourney final four, Seljaas picked up offers from Utah and USF. "It was a good week," said Seljaas on Monday.

Having seen Seljaas in Las Vegas, one national recruiting expert said he intended to rank him in his Class of 2015 Top 100.

Knowing that more offers would have been forthcoming, Seljaas said the recruiting attention is "nice, but it's just a lot of pressure, and I just wanted to get it out of the way."

After informing Rose of his commitment, Seljaas called the other offering coaches, including those for two instate schools. Seljaas says the rivalry among BYU, Utah and Utah State was never really a consideration for him growing up.

"I wasn't really favoring one school over the other," Seljaas said. "I just thought it was a good rivalry between BYU and Utah, but Utah State is also fun to watch."

A 6'7", 200-pound wing, Seljaas was a second-team all-state selection for the 4A Braves in 2012-13, averaging 15 points, four rebounds, three assists and a steal per game; the junior-to-be scored in double figures in all but three contests.

The Deseret News recently cited Bountiful head coach Mike Maxwell, who said Seljaas is "just a terrific player and he's going to get better and better...kind of a hidden gem right now that's developing into something special."

Asked what he'd like to get better at over the next couple of seasons, Seljaas said "right now, it's everything; I just want to improve in everything, especially to get to the next level, and mainly right now it's strength, then work on everything else as it comes."

He identified shooting as his biggest asset, "then being able to handle the ball at my size.

Seljass anticipates joining BYU for 2015-16 season, which would follow Tyler Haws' final season as a Cougar. Seljaas says helping to fill Haws' shoes at that time "would be a great opportunity."

As the first BYU commit for the Class of 2015, Seljaas forms the foundation of group that follows BYU's nationally-recognized recruiting classes for both 2013 and 2014. Seljaas says joining Rose's deep talent pool demonstrates "how much work pays off, and to know that there are others who are even better than you and you can look up to them and follow what they do."

He said during an unofficial visit, he met and hung out with Kyle Collinsworth and Eric Mika, among others, and looks forward to being their teammates.

Seljaas notes that a primary factor in his recruitment to BYU was the composition of the coaching staff.

"Just the way that the coaches are and the way they talked," said Seljaas, "and then from past players telling me about it, I just felt that it was the right place."

"It's great because (the coaches) are all friends, and you can tell that when you talk to all of them. Coach Rose is a great coach, and he has great records in everything that he has done; he's just an amazing coach."

He said having a sister who had already played for BYU "was just helpful to know what to expect, but other than that, it wasn't really big." He said Nancy, now a girls' basketball coach at Lone Peak HS, "was excited" to hear his news.

It is anticipated that after finishing up at Bountiful, Seljaas will play for the Cougars in the 2015-16 season.