TSA employee misconduct up 26% in 3 years 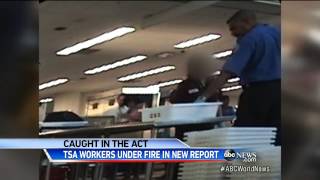 TSA Workers Allegedly Stealing From Passengers and Sleeping on Duty

SALT LAKE CITY — Let's get this out of the way straight off: The Transportation Security Administration is probably not going to top anyone's list of Favorite Federal Government Agencies.

And the stories of its failures spread faster than a speeding jetliner: TSA officers stealing money from luggage, taking bribes from drug dealers, sleeping on the job.

So it shouldn't come as any surprise that a new Government Accountability Office report, citing a 26 percent increase in misconduct among TSA employees between 2010 and 2012, is striking a nerve with some travelers who've had to endure the shoeless, beltless shuffle on the trip through security.

"This makes me never want to check my bag," Twitter user KathrynPowers1 posted Wednesday in response to the news.

Among the report's findings:

— About a third of the cases involved being late or not reporting for work, the largest single category of offenses.

— About a quarter involved screening and security failures — including sleeping on the job — or neglect of duty offenses that resulted in losses or careless inspections.

The report details one case of a TSA agent suspended for seven days after trying to carry a relative's bag past security without screening. A supervisor interceded and the bag was found to contain "numerous prohibited items," according to the GAO report. It didn't say what the items were.

Among the 9,622 offenses cataloged in the report, the GAO also found 384 ethics and integrity violations, 155 "appearance and hygiene' complaints and 56 cases of theft.

In another case, a TSA agent was suspended for 30 days after a closed-circuit camera caught the officer failing to individually examine X-ray images of passenger items, as required by agency policy.

Among the 9,622 offenses cataloged in the report, the GAO also found 384 ethics and integrity violations, 155 "appearance and hygiene" complaints and 56 cases of theft.

While not specifically mentioned in the report, notable cases of theft by TSA agents include a 2012 case in which two former employees pleaded guilty to stealing $40,000 from a checked bag at New York's John F. Kennedy Airport, and a 2011 guilty plea from an officer who admitted stealing between $10,000 and $30,000 from travelers at Newark Liberty International Airport in New Jersey.

The officer in the 2011 case, Al Raimi, admitted he would "kick up" some of that money to a supervisor, who in turn allowed him to keep stealing. The supervisor, Michael Arato, also pleaded guilty to accepting kickbacks and bribes.

Overall, 47 percent of the offenses detailed in the report resulted in a letter of reprimand, at least 17 percent cost the employees their jobs and 31% ended with a suspension.

"If they're stealing, they're doing drugs or breaching the security system intentionally and I can prove it, they're out," TSA Deputy Administrator John W. Halinski told a joint hearing of two House Homeland Security subcommittees on Wednesday.

But he said, even the letters of reprimand handed out in nearly half of the cases are serious punishment.

Such letters can block employees from receiving a bonus or promotion, and stay with them their entire career, he told Rep. Richard Hudson, R-North Carolina, chairman of the Transportation Security subcommittee.

But Rep. John Mica, a Florida Republican and longtime critic of the TSA who requested the audit, is skeptical. He told CNN that the report shows the TSA is not doing enough to respond to and prevent misconduct.

Transportation security officers have an undeniably hard job and the overwhelming majority of them conduct themselves honorably and in accordance with TSA protocols.

Some other lawmakers stood by the agency Wednesday, saying the offenses represent a small percentage of TSA's 56,000 employees.

"Transportation security officers have an undeniably hard job and the overwhelming majority of them conduct themselves honorably and in accordance with TSA protocols," Rep. Cedric Richardson, D-Louisiana, said during Wednesday's hearing.

Frost and Sullivan airport security analyst John Hernandez said the report isn't particularly surprising. The TSA has been plagued by uneven training for years, he said, resulting in a work force that isn't always properly educated about how to do their jobs.

"I think John Q. Traveler should not so much be concerned, but take an active role in security," he said. "As they are willing to point out things we do wrong, we should be ready to report on the failure in their security operations, as well."

The government report calls on the TSA to improve how the agency monitors and follows up on allegations of misconduct. The agency has accepted the recommendations, Halinksi said.