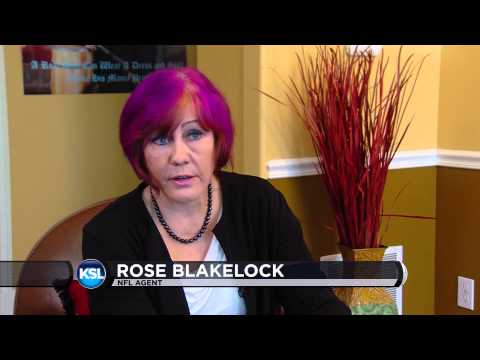 Rose Blakelock begins her NFL agency at the age of 62

SALT LAKE CITY — "I will not rest until I have you wearing your own shoe, playing your own Sega game, featuring you, while singing your own song in a new commercial starring you."

That was the handsome, clean cut, fast talking Jerry Maguire, in the 1996 blockbuster movie.

When you think of sports agents, Maguire usually comes to mind. Now, it's Rose Blakelock's turn to flip that image on its ear.

Blakelock spent a couple of decades as a nurse, then went to BYU law school and got her law degree. She's practiced law for over 20 years. And when most people are looking at retirement, Blakelock, with her signature purple hair, decided to become an NFL agent at 62.

Blakelock chuckled, "That's a nice name on a good day. I've been called a lot worse."

When former Utah linebacker Boo Andersen met Blakelock, she made a good impression. "Who is this bad (expletive)? She's right up my alley, you know. As soon as I make it in the NFL, I'm cutting a mohawk and dying my hair purple just to be like her."

It's got nothing to do with me. (NFL teams) don't care if Jerry Maguire calls. Ego would have you think that the agent means something. The players mean something.

Those natural moments of self-doubt seem to elude Blakelock. And although extremely confident, there's a certain humility and lack of egotism that she credits to the maturity of a semi-advanced age.

"It's got nothing to do with me. (NFL teams) don't care if Jerry Maguire calls. Ego would have you think that the agent means something. The players mean something," she said.

Stereotypes brought out the doubters.

"I grew up in the '60s. Stereotypes are for other people," she said. "They said I couldn't do it, so naturally, I wanted to take the (sports agent) test. Then after I did it and passed, they said 'Well, you may have passed the test, but you certainly couldn't get anyone into the NFL. Nobody would sign with you.' Nothing's better than a challenge, after all."

After a little more than six months, Blakelock has signed over a dozen athletes, and at least a quarter of those either have invitations to fall camps with NFL teams or expect invitations.

Hadley has seen the surprise in people's faces when he talks about his agent. "They are always, 'What's his name?' It's actually a her and they're like, 'A her' "?

As a linebacker in the Pac-12, Andersen has an advanced degree in toughness, but he said Blakelock is tougher.

"She's a lot tougher than any NFL agent there is, male or female. Rose doesn't care, she loves adversity and loves starting from the bottom and working her way up. That's what I admire about her. She's an inspiration to me."

She's a lot tougher than any NFL agent there is, male or female. Rose doesn't care, she loves adversity and loves starting from the bottom and working her way up. That's what I admire about her. She's an inspiration to me.

Hadley had other opportunities to sign with more conventional and experienced agents.

"At first it felt like a risk, but really it wasn't," he said. "She did everything she said she would do and she's done it effectively. Plus, my mom really likes her. So if momma Hadley likes her, you got to go."

In a business full of entourages, publicists and handlers, Blakelock embraces her motherly role.

"I love them," she said. "If you want these boys to succeed you have to care for them. I'm not taking them down to Vegas for show-night. I'm making them do their vitamins and workout. I want them to think of this as a business and you can't party and business. You can't."

"Women are natural caretakers and I think this is why I like the NFL on the agent's side, because I can mother the boys and help them in a business sense, but no less care-taking," she added. "I think a good agent is a caretaker."

"I'm sure glad I found her because she's been a blessing in disguise." Andersen said. "I wouldn't have anybody else represent me but her. She's an amazing person."