WEST VALLEY CITY — The family of a 21-year-old woman killed in an officer-involved shooting yesterday await answers in her death. So far, there are still a lot of unanswered questions about the shooting at this apartment complex.

We still don't know why officers shot and killed Danielle Willard. Her family says, she wasn't a violent person but drugs may have been her downfall.

Willard's mother, who lives in Vancouver, Washington, is anxious for information to come out.

"Everything that keeps going through my mind is speculation," said Melissa Kennedy. "Did she get back on drugs? Was she really clean? Was it the wrong place at the wrong time?"

Willard was shot Friday and killed by undercover officers in the parking lot of an apartment complex in West Valley. Police used white sheets to cover her body from public view. Authorities aren't saying what led to the shooting. 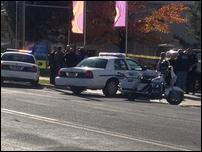 For more on Danielle Willard's history and struggle with addiction, visit the <A href="http://www.deseretnews.com/article/865566011/Shooting-victim-battled-drugs-Many-questions-unanswered-by-police.html" tqarget=_blank>Deseret News.</a>

An officer who was hurt during the incident yesterday has been released from the hospital. It's unclear how he was injured.

Willard's family says she struggled with a heroin addiction. She moved to Utah in April to try and shake the demons from her past.

"She went there to a sober house to get clean," Kennedy said. "She was doing so good."

Kennedy said she had just obtained her own apartment to live in. Willard's family doesn't want people to judge her. They say she had a different side than the drug addict: A budding photographer, a former high school track star, a daughter, a sister and friend.

"She obviously has a lot of conflict inside her, but what people need to remember is she had a very good soul. She was a good person, a giving person," Kennedy said.