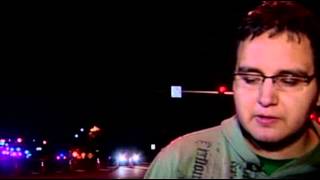 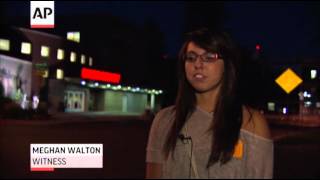 Outside Hospital, Friends Wait the Injured

AURORA, Colo. (AP) - As the new Batman movie played on the screen, a gunman dressed in black and wearing a helmet, body armor and a gas mask stepped through a side door. At first he was just a silhouette, taken by some in the audience for a stunt that was part of one of the summer's most highly anticipated films.

But then, authorities said, he threw gas canisters that filled the packed suburban Denver theater with smoke, and, in the confusing haze between Hollywood fantasy and terrifying reality, opened fire as people screamed and dove for cover.

At least 12 people were killed and 58 wounded _ 11 critically _ in one of the deadliest mass shootings in recent U.S. history.

"He looked like an assassin ready to go to war," said Jordan Crofter, a moviegoer who was unhurt in the attack early Friday, about a half-hour after the special midnight opening of "The Dark Knight Rises."

The gunman, identified by police as 24-year-old James Holmes, used a military-style semi-automatic rifle, a shotgun and a pistol, stopping only to reload.

The suspect marched up the aisle in the stadium-style theater, picking off those who tried to flee, witnesses said. Authorities said he hit scores of people, with a few of the 70 victims suffering their injuries not by gunfire but in the ensuing chaos. At least one person was struck in an adjacent theater by gunfire that went through the wall.

"He would reload and shoot and anyone who would try to leave would just get killed," said Jennifer Seeger, adding that bullet casings landed on her head and burned her forehead.

Within minutes, frantic 911 calls brought some 200 police officers, ambulances and emergency crews to the theater. Holmes was captured in the parking lot. Police said they later found that his nearby apartment was booby-trapped.

Authorities gave no motive for the attack. The FBI said there was no indication of ties to any terrorist groups.

In New York City, Police Commissioner Raymond Kelly said: "It clearly looks like a deranged individual. He has his hair painted red. He said he was the Joker, obviously the enemy of Batman."

Aurora Police Chief Dan Oates would not confirm that information, but did say he had spoken to Kelly. The two used to work together in New York. Asked whether Holmes had makeup to look like the Joker, Oates said: "That to my knowledge is not true."

It was the worst mass shooting in the U.S. since the Nov. 5, 2009, attack at Fort Hood, Texas. An Army psychiatrist was charged with killing 13 soldiers and civilians and wounding more than two dozen others.

It was the deadliest in Colorado since the Columbine High School massacre in suburban Denver in 1999, when two students killed 12 classmates and a teacher and wounded 26 others before killing themselves.

The latest shooting rocked this sprawling suburb of 325,000 east of Denver. A makeshift memorial with 12 candles in a row and piles of flowers sat at a corner near the entrance to the movie theater parking lot. Up the hill from there, about 20 pastors led a vigil for about 350 people, some hugging and crying

At an emotional afternoon news conference, Colorado Gov. John Hickenlooper said the people of Aurora would rise above the spasm of violence and ultimately not be "defined" by the tragedy.

The new Batman movie, the last in the trilogy starring Christian Bale, opened worldwide Friday with midnight showings in the U.S. The plot has the villain Bane facing Bale's Caped Crusader with a nuclear weapon that could destroy all of fictional Gotham.

The shooting prompted officials to cancel the red-carpet premiere in Paris, and some U.S. movie theaters stepped up security for daytime showings.

The film's director, Christopher Nolan, issued a statement on behalf of the cast and crew, expressing their "profound sorrow at the senseless tragedy."

"Nothing any of us can say could ever adequately express our feelings for the innocent victims of this appalling crime, but our thoughts are with them and their families," Nolan said.

The attack began shortly after midnight at the multiplex in Aurora. Audience members said they thought it was part of the movie or a stunt associated with it.

The film has several scenes of public mayhem _ a hallmark of superhero movies. In one scene, Bane leads an attack on a stock exchange, and in another he leads a shooting and bombing rampage on a packed football stadium.

A federal law enforcement official said Holmes bought a ticket to the show, went into the theater as part of the crowd and propped open an exit door as the movie was playing. The suspect then donned protective ballistic gear and opened fire, the official said, speaking on condition of anonymity to discuss the ongoing investigation.

At some point, the gunman appeared to have stepped outside because several witnesses saw him come through the door.

"All I saw is the door swinging open and the street lights behind, and you could see a silhouette," said Crofter, who was sitting on the left side of the theater and toward the front.

Sylvana Guillen said the gunman, clad in dark clothing, appeared at the front of the theater just as the character Catwoman appeared in the movie. Then they heard gunshots and smelled smoke from a canister he was carrying.

As she and her friend, Misha Mostashiry, ran to the exit, Guillen said, they saw a man slip in the blood of a wounded woman he was trying to help.

Oates said the gunman wore a gas mask and a ballistic helmet and vest, as well as leg, groin and throat protectors. He said he bought four guns from local gun shops in the last 60 days and 6,000 rounds of ammunition, including a drum magazine that could fire 50 to 60 rounds per minute.

"I thought it was showmanship. I didn't think it was real," Seeger said. She said she was in the second row, about four feet from the gunman, when he pointed a gun at her face. "I was just a deer in headlights. I didn't know what to do," she said.

Then she ducked to the ground as the gunman shot people seated behind her.

Seeger said she began crawling toward an exit when she saw a girl of about 14 "lying lifeless on the stairs." She saw a man with a bullet wound in his back and tried to check his pulse, but "I had to go. I was going to get shot."

Later, police began entering the theater, asking people to hold their hands up as they evacuated the building.

Some of the victims were treated for chemical exposure apparently related to canisters thrown by the gunman. Those hurt included a 4-month-old baby, who was treated at a hospital and released.

Authorities removed the bodies from the theater on Friday afternoon. Officials wheeled a black bag on a stretcher out of the front entrance, placing it in the back of a minivan. Ten people died in the theater, while two others died from their injuries later.

Officers with a list of those confirmed dead met with the family members of the deceased Friday night to tell them the fate of their loved ones. The identities of some emerged late Friday as relatives confirmed the deaths of 23-year-old Micayla Medek, 27-year-old Alex Sullivan and 24-year-old Jessica Ghawi.

Those who knew Holmes described him as a shy, intelligent person raised in California by parents who were active in their well-to-do suburban neighborhood in San Diego. Holmes played soccer at Westview High School and ran cross-country before going to college.

On Friday morning, police escorted Holmes' father, a manager of a software company, from their home while his mother, a nurse, stayed inside, receiving visitors who came to offer support. Holmes also has a younger sister.

"As you can understand, the Holmes family is very upset about all of this," Lt. Andra Brown, the San Diego police spokeswoman, told reporters in the driveway of the family home. "It's a tragic event and it's taken everyone by surprise. They are definitely trying to work through this."

Police released a statement from his family that said: "Our hearts go out to those who were involved in this tragedy and to the families and friends of those involved."

There have been no indications so far that Holmes had any run-ins with the law before Friday.

Tom Mai, a retired electrical engineer, said Holmes was a "shy guy" who came from a "very, very nice family."

Holmes graduated from University of California, Riverside, in the spring of 2010 with a bachelor's degree in neuroscience, a school spokesman said. Mai said the mother told him Holmes couldn't find a job after earning a master's degree and returned to school.

He enrolled in the Ph.D. neuroscience program at the University of Colorado-Denver in June 2011 but left the program last month, according to the university.

Holmes lived in an apartment in Aurora, and FBI agents and police who went there discovered it was booby-trapped when they used a camera at the end of a 12-foot pole to look inside. Authorities evacuated surrounding residences, and about two dozen people headed to a shelter set up by the Red Cross at a local school.

Police were not able to enter the apartment Friday night and Oates said they will again on Saturday.

"It is a very vexing problem how to enter that apartment safely," he said.