Romney 'pulling out all stops' in South Carolina

SPARTANBURG, South Carolina — Susan Gray said she voted for Mitt Romney four years ago and will again in Saturday's primary, which could decide the GOP nominee in 2012 presidential race.

"Romney has been steady," Gray said, taking a break from her fund-raising job at Wofford College to hear the frontrunner address a crowd of about 300 people at the small private liberal arts campus Wednesday.

She said the former Massachusetts governor has the business experience the country needs. "That's where he's been consistent," Gray said. "That is the guiding issue for me right now. That is it for me."

Romney is leading in the polls in the first southern state to vote this election year after initially coming out on top in both the Iowa caucuses and last week's New Hampshire primary.

Thursday, certified election results out of Iowa were expected to show that former Pennsylvania Sen. Rick Santorum actually won the presidential poll taken Jan. 3 at GOP caucuses throughout Iowa by 34 votes, but it is not clear how that will impact voters in Saturday's primary.

Also uncertain Thursday was the effect of Texas Gov. Rick Perry leaving the race. Perry was once the leading conservative alternative to Romney but fell far behind the GOP pack after a poor debate performance before the Iowa vote.

Gray said she'd briefly considered switching her support to Perry but decided to stick with Romney after Perry struggled to answer a question during that debate, finally shrugging and saying, "Oops."

Importance of a South Carolina victory

A victory in South Carolina has been widely seen as making Romney unstoppable in his second run for the White House.

"He's sensing if he can win in South Carolina, it's all over," said Dave Woodard, a political science professor and pollster at Clemson University. "It's game, set and match to Mitt Romney."

He's sensing if he can win in South Carolina, it's all over. It's game, set and match to Mitt Romney.

He said a win in South Carolina would have a special significance to Romney, the only moderate Republican in the race after former Utah Gov. Jon Huntsman dropped out earlier this week, because it would prove his appeal to the party's conservative base.

Romney is pulling out all the stops for a "knockout punch" in South Carolina, bombarding voters, Woodard said, with automated telephone calls and mailings daily, in addition to a significant share of the seemingly non-stop campaign TV commercials from both candidates and the so-called "super PACS," independently run political action committees.

"There's so much skill in this. Nobody's in his league," Woodard said. "Someday we'll study the Romney campaign in South Carolina as a model for the way to do it."

Romney's wife, Ann, however, was cautious in her assessment of the race.

"We're hoping for a win, but this is a tough state. We all know it's tough," Ann Romney told the Deseret News. "You know, we've got a lot of friends here. So we're hopeful."

One of those friends, South Carolina State Treasurer Curtis Loftis Jr., shared the stage with Romney at the campus stop. Loftis, a tea partier, is South Carolina state chairman for Romney's campaign.

"He's going to do very well because he's a good and honorable man and people in South Carolina value those qualities," Loftis said.

He said Romney is winning over voters who in the 2008 race might not have been entirely comfortable with his Mormon faith or his evolving views over the years on issues important to social conservatives, including abortion.

"I'm an evangelical Christian who spent 10 years of my life in the mission field and I like Mitt Romney," Loftis said. "He's going to do very well with all of the groups that are supposed to not like him."

Much of the criticism aimed at Romney this time around has centered on his business experience and his personal wealth.

Romney stepped up his response Wednesday, even denouncing Gingrich during his speech at Wofford. Usually, Romney's only target on the stump is Democratic President Barack Obama.

“I was disappointed over the last couple of weeks to see one of my opponents attacking free enterprise, just like the president was,” Romney said. “That’s not the role of the Republican Party, that makes us sad.” 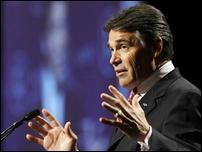 Texas Gov. Rick Perry on Thursday dropped out of the race for the Republican presidential nomination and endorsed Newt Gingrich, adding a fresh layer of unpredictability to the campaign two days before the South Carolina primary.

Gray said she appreciates how Romney is handling being in the hot seat.

"I like that fact he's been enduring all these attacks," she said. "That's someone I want leading my country, someone who can handle the heat."

Romney is keeping his focus on the economy, using his rescue of the scandal-ridden 2002 Winter Olympics in Salt Lake City as an example of the skills he'd bring to the White House.

"That's what I know how to do," Romney said. "If ever this nation needed a leader who knows how to turn things around, it's now."

He took a moment to describe a meeting on the campaign trail with a woman "with tears running down her face," who asked for help finding a job.

"A lot of people are hurting," Romney said, blaming the failed promises of the president. "It just breaks your heart to see what's happening around the country."

But Sam Walker, the college's director of dining services, said he's not sure Romney really understands the plight of the unemployed because of the controversy over how much he pays in taxes.

Romney has refused to release his past tax returns but acknowledged most of his income is from investments, taxed at a lower rate than salaries. He said, too, recently that the $370,000 he earned in a single year from speakers fees was "not very much."

"With the amount of taxes I'm hit with every week, every year, the rich keep getting richer," he said, noting he regularly sees applications from out-of-work professionals for food service jobs that pay the minimum wage.

He said the candidate who gets his vote Saturday has to "understand the common man." While that may end up being Romney, Walker said he's still intrigued by Texas Rep. Ron Paul.

Phil Davis, a farmer from Greer, said he's settled on Romney after deciding the other candidate he liked, Santorum, wasn't catching on with voters.

Romney, Davis said, is "a good family man with morals and integrity. He has the best chance to beat Obama." He said as an evangelical Christian, he was "open-minded" to Romney's Mormon faith.

Davis, too, said this election is all about the economy.

"It's all about trying to get our country strong again," Davis said. Other concerns, like Romney's shift from a pro-choice candidate in Massachusetts are "down on the list."