FORT WORTH, Texas -- Another 10-win season is on the line this Friday as the Cougars face off against the Tulsa Hurricanes. The Cougars and the Hurricanes are among the "winningest" teams in college football over the last four seasons. BYU ranks 12th and Tulsa is 20th. Both teams have plenty of bowl game experience and understand how to handle the game prep and distractions that come with it. Here are the top storylines for the Bell Helicopter Armed Forces bowl.

1. G.J Kinne, Tulsa's starting quarterback originally enrolled at the University of Texas but transferred to Tulsa after a redshirt freshman season. He is currently 2nd all time in school history in TD passes with 78 and needs five more touchdowns to tie Paul Smith for the record (Smith threw five TD's against the Cougars in 2007). Hopefully history doesn't repeat itself. Kinne is a big, strong QB that runs the ride option well and can zip the ball downfield and into tight spaces. The Cougar's defensive front will have to collapse the pocket around him to keep the throwing game limited. 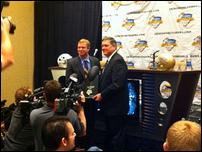 On the day before the Bell Helicopter Armed Forces Bowl, head coaches for the BYU and Tulsa football teams held a Thursday morning press conference in Fort Worth--the last day of activities in that city before the scene shifts to Dallas for Friday's game.

2. With Jake Heaps headed to Kansas University, the BYU QB position, and consequently the team, is officially Riley Nelson's. The bowl game is a great way to wrap up the current season but is also a kick-start into winter conditioning and spring ball. I'm excited to see Riley's work ethic, charisma, and desire lead the team for a full year as the recognized guy in charge. 3. Undoubtedly, the Tulsa coaching staff and players have dissected the 2007 BYU vs. Tulsa game film. Both teams racked up more than 500 offensive yards and the game was filled with quick scoring strikes. The Cougars' defensive scheme is essentially the same and the Tulsa offensive staff will look to repeat the same mismatches that they created a few years ago. Four years ago, Paul Smith and the Tulsa offense did a great job of getting one-on-one matchups with running backs against linebackers. There were multiple wheel routes (out and up) run from the backfield and took advantage of linebackers not accustomed to running down the sideline in coverage with their backs to the quarterback. Many times they were in a decent position, however it is difficult to adjust to the ball when you're not used to being in that situation. Hopefully an athletic Kyle Van Noy and a healthy Jamison Frazier are up to the task.