Most incumbents advance in primary election

Not all incumbents came out on top in Tuesday's nonpartisan municipal primary elections, but most did well enough to make it to the ballot in November.

Candidates crowded the field in a number of races where there was no incumbent in the contest. The Ogden race for mayor drew 19 percent of the city's voters to the polls, but most races attracted less than 10 percent of registered voters.

Both Salt Lake City Council incumbents advanced to the general election, though neither was the top vote-getter. 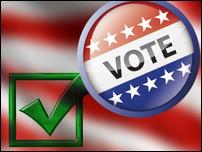 The following are unofficial results from municipal primary elections Tuesday.

"That's not a bad showing by any means," said Turner, who's seeking a fourth term representing the west-side district. "We've got 55 days until the finals, and we feel pretty confident."

LaMalfa, who collected 40 percent of the vote, said the primary results prove that "perseverance and hard work pay off."

"I think voters are looking for (a council member) who listens to them, works hard and embraces the diversity we have in our community," he said. "I'm really excited to move forward."

West-side activist Michael Clara fell short in the District 2 race for a third time. Clara, who faced off against Turner in the 2003 and 2007 general elections, finished third with 25.7 percent of the vote.

In District 6, Charlie Luke received 45.6 percent of the vote in his bid to unseat incumbent JT Martin.

"I think the residents of District 6 definitely showed they are ready for a change in leadership and a change of direction," Luke said.

Martin earned nearly 29 percent of the vote to advance to the general election. Tracey Harty was close behind with 25.5 percent.

"We have a great campaign and great support," Martin said. "Second is not a bad place to be in a primary."

In Taylorsville, the two incumbents involved in the primary contest for three council seats will advance. The results leave a proposal for the city to join the Unified Police Department uncertain.

Council District 3 incumbent Jerry W. Rechtenbach, claiming 53 percent of the votes, and challenger Dave Ballou, with 38 percent, said they are willing to hear more about the UPD proposal but are leaning against it.

Ballou said he supported the switch to UPD more before hearing a formal presentation on it.

"I feel like Sheriff (Jim) Winder is doing his best to pull a fast one on the city," he said.

In District 2, incumbent Morris K. Pratt, with 32 percent, said a rational decision can't be made until budget impacts at play outside Taylorsville are known. His challenger, Kristie Steadman Overson, with 49 percent, said she fully supports the UPD proposal.

In District 3, where there is no incumbent in the race, Israel M. Grossman, with 36 percent, said the city should continue to delve into the proposal. His challenger, Ernest Glen Burgess, with an almost-equal 35 percent, said he still hasn't seen all of the facts.

"Funding hasn't been settled," Burgess said. "When I see all the facts, I'll be willing to take a good, second look. Right now, it's just too early."

In Orem, nine candidates were competing for three at-large council seats, including incumbents Mark Seastrand, who won the most votes, and Margaret Black, who came in second. John D. VanCott came in third. Three others will join them on the November ballot.

Lehi had 15 candidates competing for three at-large council seats, with the incumbents running in all three races. James Dixon was the only incumbent who will not advance, missing the cut by only seven votes, according to the unofficial totals.

American Fork had nine candidates competing for three at-large seats, including only one incumbent.

Mike Caldwell was the top vote-getter with 34.6 percent of the vote, followed by Councilman Brandon S. Stephenson with 23.8 percent.

A pair of incumbents also failed to advance to the general election in North Ogden. Both Ron Flamm and Carl D. Turner were eliminated in Tuesday's primary.

Election results are not final until after the canvass on Sept. 20, when remaining absentee and provisional ballots will be included in the tally. Municipal general elections are Nov. 8.