SALT LAKE CITY -- The controversial Book Of Mormon musical grabbed fourteen Tony Nominations, that's just one short of the all-time record. The production from the creators of "South Park" has stirred up quite a bit of attention for the LDS church.

The musical is probably a long way from considering showings here at the Capitol Theatre, but it's still drawing a good amount of publicity locally. So when it got a near-record amount of Tony Nominations KSL decided to get reaction from a Mormon who does Musicals. "I've been involved in musical theatre since I was in third grade," said Steven Fehr. 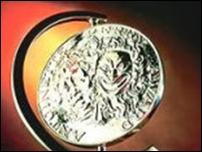 Tony Awards spark more interest than in years past

The Tony Awards are always popular, but this year there are a few names... and titles that may catch the eye of those who usually take no interest in the awards show.

Fehr is currently acting with the Pioneer Theatre Company playing a couple of roles in Sunset Boulevard.

"The powerful thing about musicals is often the music is used to express something that dialogue can't," said Fehr.

So when he heard that The Book of Mormon Musical and "South Park" co-creator Trey Parker said the show was "just a built-in coming of age story," he had some concerns.

"I know Matt Stone and Trey Parker's brand of humor," said Fehr. "And I was afraid it would do something to be offensive."

But now that this coming of age story has 14 Tony nominations and several positive reviews Fehr says the added attention the church is getting may not be all bad.

"It might actually get people more interested in the church," Fehr said. "A lot of people have actually said that it's a sweet story, with some profanity in it."

Still, the show's creators admit in their own way the LDS reception won't be all good.

But this Fehr says he's not quite ready to write it off.

"I don't think you can judge a show without actually seeing it." The L-D-S church has been very quiet about the musical. The Tonys will be handed out in June. "The Producers" holds the current record for the most awards in one night taking home 12.