SALT LAKE CITY — The U.S. was hit with torrential rains this weekend that trapped thousands of tourists at Death Valley National Park, forced vehicle rescues of dozens of people in Denver, killed at least one person in New Mexico and prompted President Joe Biden to visit the widespread damage in Kentucky where the death toll from this summer's flooding is now 37.

That's just .03 inches less than what the weather station typically sees during the entire month of August, shattering the daily rainfall record for Aug. 6, according to the National Weather Service.

The rain brought flood warnings to much of Salt Lake, Tooele and Davis counties, closing part of Little Cottonwood Canyon after storm debris blocked the road. Parts of the Utah State University campus were also closed because of flooding, while residents along the Wasatch Front piled sandbags and watched as their streets turned into waterways.

Despite a few days of dry conditions, the weather service expects the rain to make a return, first in southern Utah by Tuesday, then to the northern reaches of the state by Thursday, which could carry over into the weekend.

Speed Week canceled: The rain also postponed Utah's Speed Week, a long-running tradition where drivers from around the world compete to try and set new land speed records on the Bonneville Salt Flats.

And on Monday, the event was canceled due to water still standing on the Salt Flats. 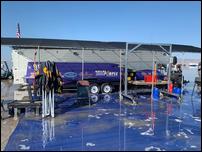 The group that organizes the annual event announced Sunday it canceled this year's festivities as a result of "unforeseen weather conditions."

President of the Southern California Timing Association Pat McDowell, and Bill Lattin, the chairman of Bonneville Nationals Incorporation, announced the cancellation, advising teams to drive slowly on the Salt Flats to gather their equipment.

Flash flooding wreaks havoc in Death Valley: Utah wasn't the only state that saw record-rainfall this weekend, with Death Valley National Park receiving 75% of its average annual rainfall in a single day, according to the National Weather Service.

Major flash flooding in Death Valley National Park this morning. Approximately two dozen vehicles trapped in mud and rock debris at the Inn at Death Valley. Took nearly 6 hours to get out. #cawx#stormhourpic.twitter.com/3rDFUgY7ws

The park along the California-Nevada border was hit with 1.46 inches of rain, which is more than has ever been recorded in the month of August. Flash flooding followed, trapping at least 1,000 people, both employees and tourists, inside the park as roads washed out.

Roughly 60 vehicles were buried in mud and debris, the park service said.

Evacuations along I-70 in Denver: Crews rescued 29 people from their vehicles in the Denver area Sunday evening after heavy rain caused flash flooding.

Just after 8 p.m. a stretch of I-70 was closed in both directions after water levels rose to car bumpers, according to Denver's 9News.

Some towns surrounding Denver received over 2 inches of rain from the storm, which even prompted a tornado warning for parts of the county.

This also happened on 38th and Blake in Denver…

The Hermit's Peak Calf Canyon fire, the largest to ever burn through New Mexico, left large swaths of mountainside unable to absorb water. Landslides and flooding typically follow, and on Sunday a man died after his pickup truck was carried into a riverbed, according to Reuters.

Officials say it's the latest death from flash flooding in the area, after three people were killed in late July in Las Vegas, New Mexico.

According to Reuters, over 430 homes have been destroyed since the fire in April.

Biden visits Kentucky to survey damage: President Joe Biden and first lady Jill Biden arrived in Kentucky on Monday to meet with leaders and families affected by what is the worst flooding in the state's history.

Over 37 people have died since the storms brought chaos to the state, in some areas dumping nearly 10.5 inches of rain in only 48 hours.

The National Weather Service has warned that flood risks are still high as more thunderstorms are expected later in the week.

Monday marks Biden's second visit to Kentucky since taking office — in December he toured damage from tornadoes that killed 77 people.

"They will receive an update on the disaster response, thank those on the front lines and share in the community's grief," White House press secretary Karine Jean-Pierre said during a recent news conference.

Kyle Dunphey
Kyle Dunphey is a reporter on the Utah InDepth team, covering a mix of topics including politics, the environment and breaking news. A Vermont native, he studied communications at the University of Utah and graduated in 2020. Whether on his skis or his bike, you can find Kyle year-round exploring Utah’s mountains.