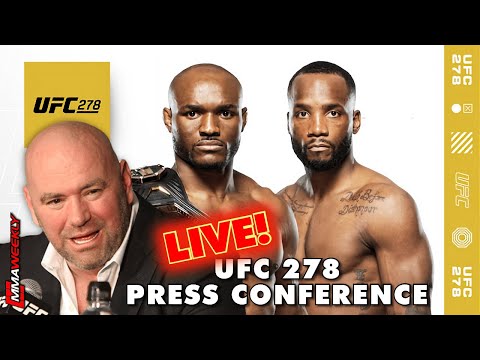 SALT LAKE CITY — On the surface, perhaps, it didn't make much sense.

When the Ultimate Fighting Championship announced the location of its UFC 278, headlined by the world welterweight championship of Kamaru Usman and challenger Leon Edwards, the location of Salt Lake City caught several passionate MMA fans by surprise.

Salt Lake? Hasn't UFC already been there? And how did that go last time?

To be fair, not great; the UFC visited Vivint Arena in 2016 for UFC Fight Night 92, a bout headlined by rising stars Yair Rodriguez and Alex Caceres, and highlighted by local grappler Court McGee's split-decision victory over Dominique Steele.

But that fight drew just over 6,600 people to Vivint Arena, with a gate of $481,033, and drew serious concerns in some MMA circles over the viability of a return trip to the Wasatch Front.

Concerns from everyone, that is, except UFC president Dana White.

"This city is booming, too. It's really about the destination, and we're growing the way we should be growing. This place has always been a sports town, with soccer, with basketball; we're at a whole different level than we were six years ago. And we're bringing the pay-per-view."

UFC President @danawhite and @utahjazz Owner & Chairman @RyanQualtrics answered questions ahead of @ufc 278 at #VivintArena on August 20! Tickets go on sale Friday at 10AM. pic.twitter.com/Y2CW9EUwGM

Of course, White had plenty of reasons to sell the event, which will be Utah's first-ever live pay-per-view main cardline with a handful of preliminary bouts streamed under the UFC's new deal on ESPN and ESPN+. And like the ever-masterful promotional artist that he is, he sold it.

"If you're a fan and you live in Salt Lake City, there's nothing better than the UFC on TV. UFC is awesome on TV," said White, sitting next to Utah Jazz owner Ryan Smith during a press meet-and-greet Tuesday at Vivint Arena. "But it is the greatest live sporting event you will ever see.

Who's not to believe him, either?

The UFC is riding a streak of 17-straight sellouts, including Saturday's most recent capacity crowd at UFC Fight Night in Austin, Texas. McGee was there, the casualty of a first-round knockout by Jeremiah Wells that could leave the Layton native who fights out of Orem questionable to fight in the return trip to his home state.

White didn't confirm anything, but he didn't deny that McGee might be good to go as a preliminary bout in UFC 247. He also said other Utah-based fighters, including Kaytlin "Katniss" Neil from Lindon, who is currently participating in season 30 of "The Ultimate Fighter," could be in consideration for the few remaining cards after the promotion announced 10 other bouts as preliminary to Usman-Edwards 2.

If nothing else, maybe White will revive his famous YouTube series "Lookin' for a Fight" to find a couple of up-and-coming local fighters for a potentially life-changing shot at a ticket. Maybe, that is.

"We're doing 15 fights per card now," White said. "I'm sure we'll wind up with a couple of guys from Utah."

With White, you can't rule anything out — not even bringing in UFC superstar Nate Diaz as a late addition to the Salt Lake City fight.

Six years after hosting its first — and so far, only — UFC event, the promotion's biggest stage is coming back to Utah, courtesy of Smith and the Utah Sports Commission.

"You'll start to see more and more, and we're just happy to be a part of it."

Not all the preliminary bouts are set, but one that stands out is the return of former UFC featherweight champion and current No. 2 bantamweight contender Jose Aldo, who will look to defend his 31-7 record against challenger Merab Dvalishvill.

But there's no doubt which card earns the title spot.

"Kumaru Usman is the pound-for-pound best fighter in the world, and the best welterweight out there," White said. "All the Canadians are going to go crazy I said that, but listen: it's hard to deny this guy is the greatest welterweight ever. Now he's starting to lap guys, to beat guys twice.

"But Leon Edwards is the No. 1 contender in the world right now. He's the guy that should be fighting the champ."

In leading UFC out of the wilderness of the COVID-19 pandemic, from "Fight Island" in Dubai to being among the first sports to return to action in the United States, White has led the UFC to a remarkable period of growth in the last two years.

So, too, has Smith since taking ownership of the Jazz from the family of the late Larry H. Miller.

It's all part of the rebrand of Smith, the two-year owner of the Jazz who recently partnered with Philadelphia 76ers part-owner David Blitzer to purchase Real Salt Lake, and more recently introduced a rebrand of the Jazz color scheme that also better emphasizes a return to purple.

It's all part of the master plan of Smith, who made his billions in software with Provo-based Qualtrics, to rebrand his home state.

"Something's changed; Salt Lake is not a flyover city, and Utah is not a flyover state," the BYU graduate said. "I think that's manifested through concerts, through events like this; it's becoming a destination.