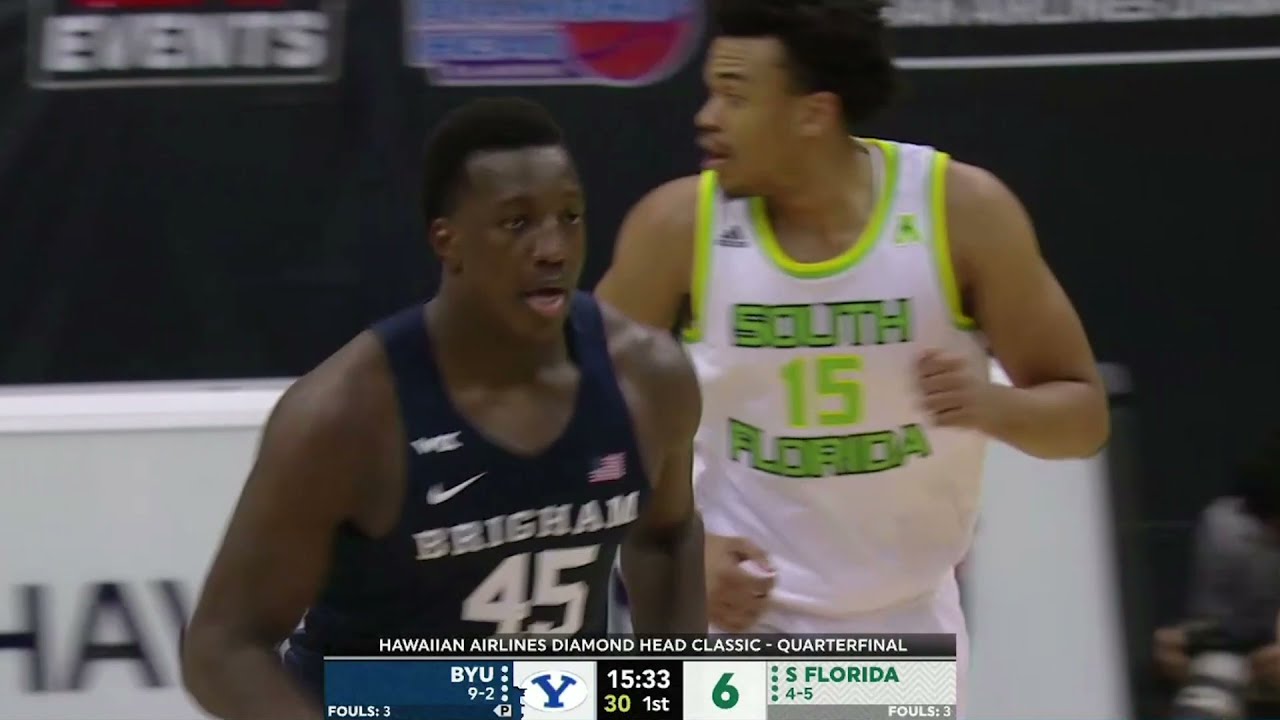 PROVO — South Florida turned BYU's trip to the beaches of Waikiki into a rock fight.

Lohner totaled 9 points and a season-high 14 rebounds, and Gideon George added 11 points and four rebounds as the Cougars held off South Florida 54-39 in Wednesday's quarterfinals of the Diamond Head Classic at the Stan Sheriff Center in Honolulu, Hawaii.

Fousseyni Traore added 11 points and nine rebounds for BYU (10-2), which outrebounded the Bulls 48-30; that included a career-high five boards from freshman Atiki Ally Atiki in his second career start.

"This is a great defensive team in South Florida; they're really, really long, they're really athletic, they're really disciplined," BYU coach Mark Pope said. "The held the No. 16 offense in the country to 10 points through the first 15 minutes of their game.

"I was proud of our guys, how they managed the frustration that South Florida can cause, kept moving the ball, kept fighting. It was a great win."

BYU shot just 36% from the field against a Bulls defense that averaged just 57.4 points-against per game — the 13th-best scoring defense in the NCAA. But the Cougars held South Florida to 26% from the field and held the Bulls off the scoreboard for over four minutes down the stretch to pull away for good.

"We knew exactly what we were going to get," said BYU assistant coach Chris Burgess, who prepared the scouting report on the Bulls. "We knew they would try to defend us, and if they didn't have a good shot offensively, just grind it out.

"Our guys followed the game plan exactly as we wanted … and I'm super proud of our guys. This is a frustrating game. Having to win on the defensive end, knowing it's OK to give up that shot — that's an analytical win for us. It's a great win."

The Cougars knew the Bulls (4-6) right down to their style of defense — a long, athletic squad that had 18 fouls and 16 turnovers but scored just 8 points off those takeaways.

"We knew it was going to be super physical," Burgess said. "They're a physical team, coming from an American Athletic Conference that is super athletic and likes to hand check and body you up. Our guys played through it … and I think our guys settled it down."

After a slow start offensively, Alex Barcello single-handedly raced to an 8-0 run with back-to-back 3-pointers that gave BYU a 23-18 advantage with four minutes left in the half to break an 18-18 stalemate.

The sixth-year senior only took two shots in the first 14 minutes of the game — both misses — but shot 3 for 5 from the field for 10 points before the break, his 15th-straight game in double figures.

"Coach always talks about how there was going to be frustration, and we have to keep fighting through that frustration," Burgess told BYU Radio. "At some point, we were going to break through — and of course, it was Alex with two threes and a couple of technical free throws.

"We knew it was going to be hard to score, but we were going to break it open with a couple of buckets. We just had to keep them out of transition, and keep them off the offensive glass."

Perhaps more importantly, the Cougars held the Bulls to one field goal in the final 6:30 of the half, outscoring South Florida 16-4 down the stretch en route to a 31-22 halftime advantage.

BYU had nine first-half turnovers — too many, Pope would say — but USF only scored 3 points off those turnovers and the Cougars punished the boards 24-14 with a 19-10 edge on the defensive glass before Seneca Knight's buzzer-beater at the break.

Trevin Knell stretched BYU's lead to 11 with his first points of the game about 90 seconds into the half, and pushed it back to double digits with a deep 3-pointer from the top of the arc with 16:01 to go.

The Bulls held BYU scoreless for six minutes, and Corey Walker Jr. pulled the USF within five, 38-33 with a layup with 11:12 remaining to cap a 6-0 spurt.

But South Florida could get no closer.

Te'Jon Lucas had a game-high seven assists for the Cougars, the No. 24 team in the NCAA's NET rankings whose two losses came in Quad 1 (at No. 68 Utah Valley) and Quad 2 (vs. No. 57 Creighton in South Dakota) scenarios.

"We have a bunch of new guys, and they're all sticking together and playing for each other," Fueger said of the team's 10-2 start. "It's a really fun team to be around. Fouss and Atiki are playing a ton of minutes as freshmen, which we didn't expect at first, and our senior guards Te'Jon and Alex are doing a great job of keeping everyone keeping everyone together."

BYU advances to the Diamond Head Classic semifinals Thursday against SEC foe Vanderbilt, which beat host Hawaii 68-54 in the late quarterfinal. Liberty will face Stanford in the other semifinal.

Scottie Pippen Jr. poured in 21 points, three rebounds and two assists to lead the Commodores 7-4), the No. 99-rated team in the latest NET rankings that forced 21 turnovers in the win.

Because Hawaii lost, the second game of the evening session will be the Warriors' consolation-bracket game with South Florida at 10 p.m. MST. That means BYU and Vanderbilt will tip at 8 p.m. MST on ESPN2.

The championship game is scheduled for 6:30 p.m. MST on ESPN.