'My name is Cleo': Police weep upon rescuing Australian girl

A police officer carries rescued girl Cleo Smith in Carnarvon, Australia Wednesday. Police smashed their way into a suburban house and rescued the girl whose disappearance from her family's camping tent on Australia's remote west coast more than two weeks ago both horrified and captivated the nation. (Western Australia Police via AP) 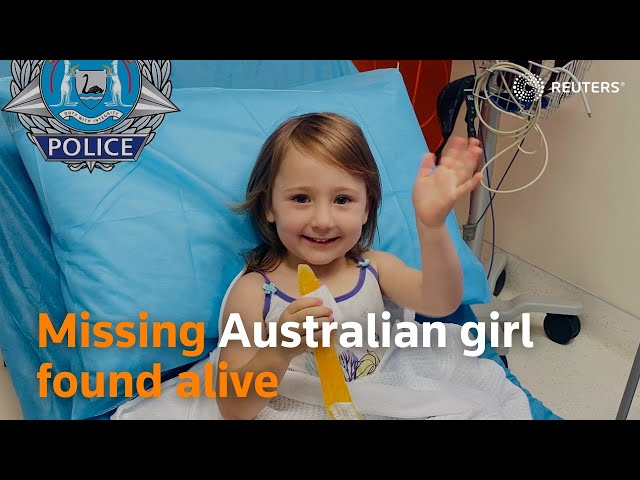 CANBERRA, Australia — Police smashed their way into a suburban house on Wednesday and rescued a 4-year-old girl whose disappearance from her family's camping tent on Australia's remote west coast more than two weeks ago both horrified and captivated the nation.

Officials wept with relief after seeing body camera video of a police officer scooping up the girl, Cleo Smith, and hearing her say, "My name is Cleo." A 36-year-old local man was arrested after the late-night raid at the house in the coastal town of Carnarvon, which followed a tip to police on Tuesday.

The girl was reunited with her mother Ellie Smith and stepfather Jake Gliddon soon after her rescue. "Our family is whole again," the mother said on social media.

Western Australia state Police Commissioner Chris Dawson would not detail what the girl had gone through. She is "as well as you can expect," Dawson said. "This has been an ordeal. I won't go into any more details, other than to say we're so thankful she's alive."

Prime Minister Scott Morrison reacted from the United Arab Emirates on his way home from Scotland, thanking police for finding Cleo and supporting her family.

"It's every parent's worst nightmare. The fact that that nightmare has come to an end and our worst fears were not realized is just a huge relief, a moment for great joy," Morrison told reporters.

"This particular case, obviously, has captured the hearts of Australians as we felt such terrible sorrow for the family," he added.

Cleo's family lives in Carnarvon, a community of 5,000 people, and the girl had disappeared with her sleeping bag on the second day of a family camping trip at Blowholes Campground, 75 kilometers (47 miles) north of Carnarvon, on Oct. 16.

A massive land and sea search was initially mounted in the sparsely populated region on the assumption that she had wandered from the tent. But more evidence began to support an abduction.

A vehicle was reported speeding away from the area in the dark hours of the morning. A zipper on a flap of the tent compartment where Cleo and her sister were sleeping was too high for the girl to have reached.

Forensic scientists examined the exterior of the family's home to see if a predator had stalked Cleo and attempted to break in.

And a distraught Ellie Smith made emotional public appeals for information on her daughter's whereabouts that were broadcast across Australia.

New South Wales Police Commissioner Mick Fuller said Dawson told him he had broken down in tears when she was found.

Fuller had called across the country from Sydney on the east coast, to Perth in the west, to congratulate Dawson on the outcome.

"He broke down and cried, which for a veteran in policing, you rarely see that," Fuller told Sydney Radio 2GB. "It speaks volumes in terms of the amount of effort they put into finding her."

"Whilst we were all hoping and praying as the days went on, I think the chances of finding her alive were so slim," he added.

Dawson said body camera video of four police officers breaking into the house with a search warrant and finding the girl made him emotional.

"It's a really joyous occasion. We don't always get these sort of outcomes, and while we were very, very concerned, we didn't lose hope," Dawson said.

"We were ... looking for a needle in a haystack and we found it," Blanch told Perth Radio 6PR.

"When she said, 'My name is Cleo,' I don't think there was a dry eye in the house," Blanch said, quoting the girl's words to the police officer who picked her up in his arms.

When she said, 'My name is Cleo,' I don't think there was a dry eye in the house.

The state government had offered a 1 million Australian dollar ($743,000) reward for information five days after her disappearance, but Blanch said the money was not expected to be claimed.

Police had received intelligence on Tuesday guiding them to the house, but the breakthrough was the result of investigators piecing evidence together, Blanch said.

Carnarvon Shire President Eddie Jones said the local community would be "elated, thankful" when they heard the good news.

"I'm beyond relieved. The nightmare is now finally over for Cleo and her family," Western Australian Premier Mark McGowan posted on social media.