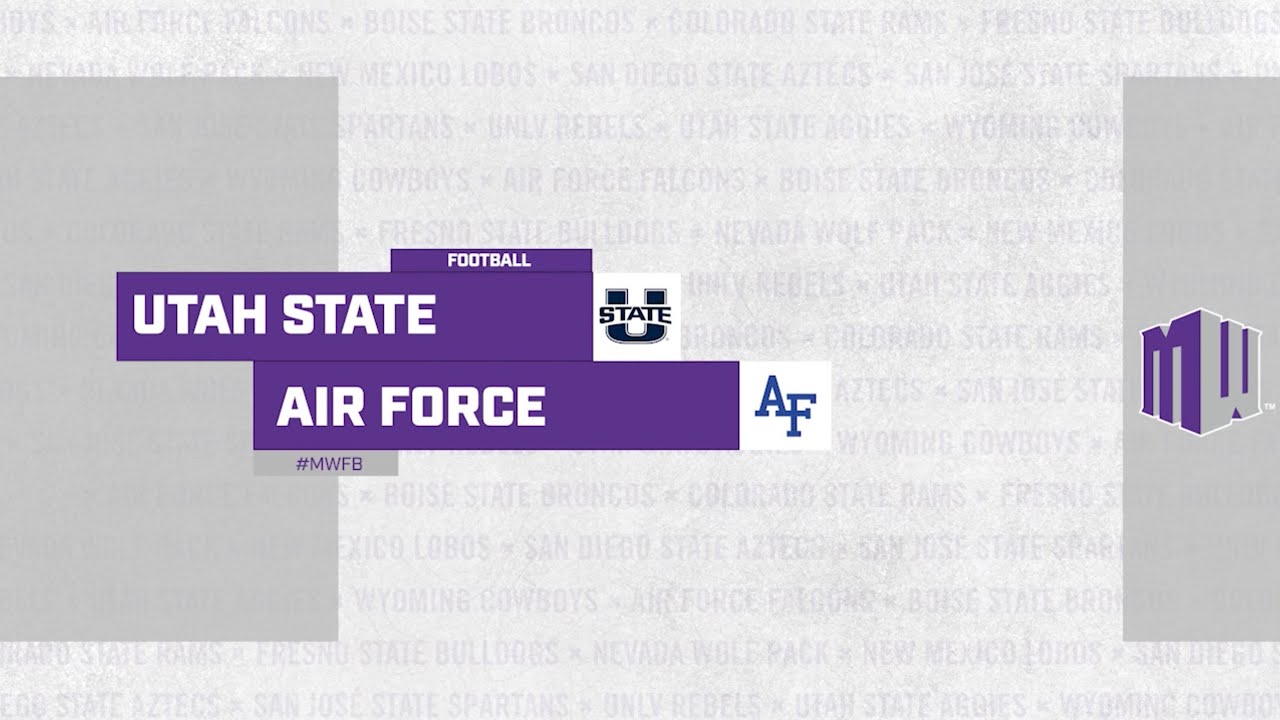 But the Aggies got in the final punch.

It came from senior linebacker Justin Rice, who with 2:30 left in the game, tracked down quarterback Haaziq Daniels and knocked the ball out of his hands at the Utah State 27-yard line. The ball was recovered by the defense, and the visitors from Logan held on for a 49-45 win.

Surmounting a double-digit deficit for the third straight game, the Aggies are now 3-0 on the season for the first time since 1978. It's also their first win in Colorado Springs since 2013 — a big victory over a divisional rival to start out Mountain West Conference play.

"Coming out here, winning, I mean, the locker room was insane right after the game," Rice said. "We're so happy for each other. We're a really close unit. We're rolling. We have a lot of confidence and we're ready to take on this conference."

It took nearly everything the Aggies had to pull out the victory: 628 total yards of offense, 448 passing yards between two quarterbacks, 36 second-half points, three forced turnovers. But the Aggies found a way to get it done.

"I keep telling them to keep playing hard and that good things will happen," Utah State coach Blake Anderson said. "The game did not go at all like I expected it to go, but when we had to have plays, guys stepped up."

One guy in particular was junior quarterback Andrew Peasley.

Two minutes into the second half, junior quarterback Logan Bonner — who finished the game 21-of-35 for 253 passing yards — threw a touchdown pass to junior Justin Mcgriff to cut the deficit to 24-20. After making the throw, he was hit in the back by an Air Force defender and fell to the ground writhing in pain.

Out for nearly the rest of the game, Peasley stepped in and picked up where Bonner left off, going 10-of-15 for 195 passing yards and throwing for three touchdowns, two of which came on crucial third downs.

On third-and-11 with 4:57 left in the third quarter, Peasley hit a wide-open Brandon Bowling for a 37-yard touchdown to take a 34-31 lead over the Falcons.

On third-and-7 from the Aggies' 29-yard line — just moments after a fourth-and-3 shuttle pass to Carson Terrell kept the drive alive — Peasley connected with Deven Thompkins in stride for a 71-yard touchdown pass to narrow Air Force's lead to 45-40 with 9:51 remaining in the game. Then, on the ensuing 2-point conversion, Peasley escaped the impeding pressure and pranced into the end zone to make it a 3-point game.

"The double move to (Thompkins), you know, just give that man a chance and he's gonna make a play," Peasley said. "The one to Brandon Bowling, just a scripted play. They blitzed pretty hard on it and I got the ball out. ... I don't think I did anything special on those, we just executed as an offense and it gave us a good chance to win."

Following the touchdown pass to Thompkins, the Utah State defense, which struggled all night long, came up with a big stop and forced Air Force to punt. With the ball back, Peasley handed it off to Calvin Tyler Jr., who took it 61 yards to the house, giving the Aggies a 49-45 lead with 3:54 to play.

A depleted-looking Aggies defense was then able to make one more play, as another playmaker, Rice, forced the fumble to keep the Falcons out of the end zone and to seal the game.

"We just knew that they were going to score, and all week long we talked about how the quarterback's ball security, once he gets past the line of scrimmage, is not very good," Rice said. "So I just saw him loose with the ball and just started going after it."

The forced fumble came after what had been a frustrating evening for Rice and the Aggies defense. The Air Force offense found huge success running their triple option, rushing for 437 yards and passing for 182. The Falcons finished the game with seven plays that went 30 or more yards, four of which resulted in touchdowns.

In the third quarter, fullback Emmanuel Michel had two breakaway runs for 51 and 55 yards, which put the Falcons ahead 31-20, then again 38-34.

After that, the Aggies defense held them to a punt and fumble, while the offense scored two unanswered touchdowns.

"Well, they do what they do," Anderson said of the Air Force offense. "They make you defend everything. Do a great job of countering you when you take something away.

"I don't know that we ever felt like we were right where we needed to be. We did feel like we could match scores well but we didn't expect the game to be near the high scoring game that it ended up being. But we did enough to get stops and put our offense in a position to go down and win it."

In the first half, Air Force did a good job breaking out of their option offense to burn the Aggies.

The Aggies had success passing the ball in the first half, just like they did in the second. Bonner passed for 190 yards in the half, 100 of which went to Bowling, who caught a 6-yard touchdown with 10:16 left in the half.

But for the third game in a row, Utah State was a second-half team. In the fourth quarter, alone, they have outscored teams 51-10. They now turn their attention to Boise State, who they host at 10 a.m. Saturday.

"Anyway, (this win) just makes the next one even bigger," Anderson said. "And as I understand, there's still a few tickets left for next week. We need those suckers to sell out quick and pack the house because you know what's coming to town."