Report: Over 600 bodies found at Indigenous school in Canada

Cowichan Tribe member Benny George holds his child Bowie, 3, on his shoulders as they listen during a ceremony and vigil for the 215 children whose remains were found buried at the former Kamloops Indian Residential School, in Vancouver, British Columbia, on National Indigenous Peoples Day, Monday, June 21, 2021. (Darryl Dyck/The Canadian Press via AP) 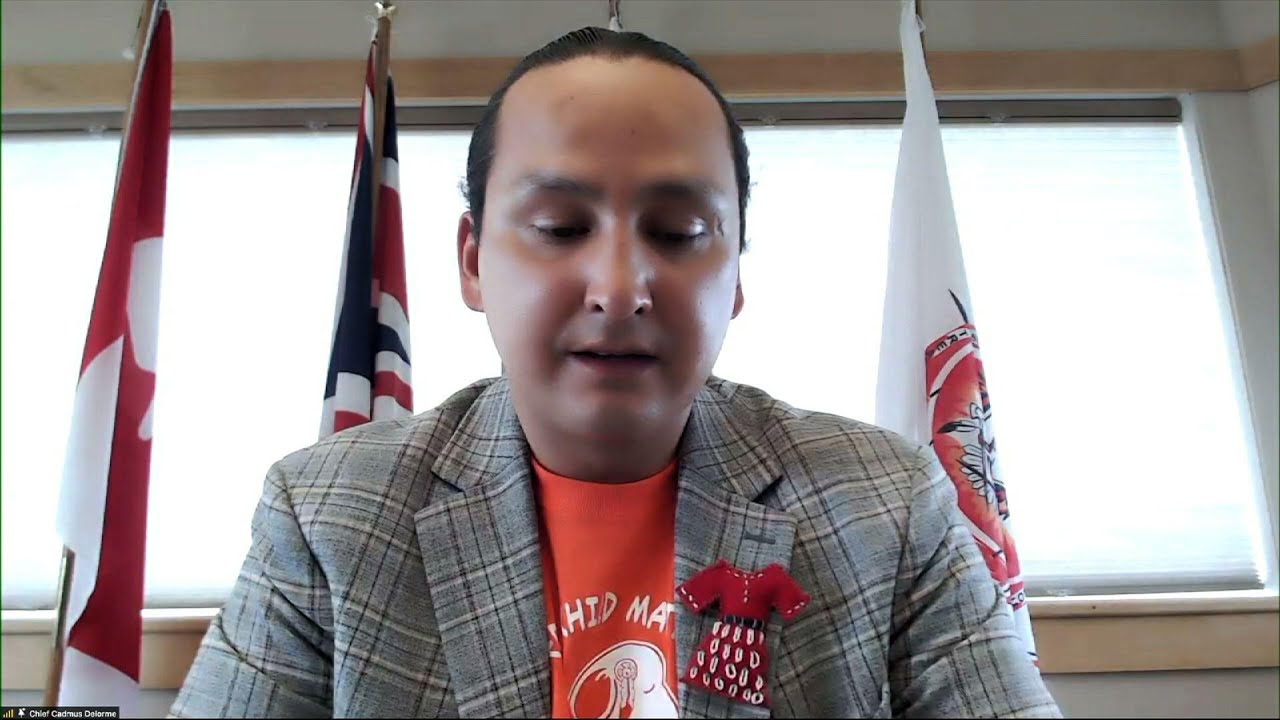 VANCOUVER, British Columbia (AP) — Leaders of Indigenous groups in Canada said Thursday investigators have found more than 600 unmarked graves at the site of a former residential school for Indigenous children — a discovery that follows last month's report of 215 bodies found at another school.

The bodies were discovered at the Marieval Indian Residential School, which operated from 1899 to 1997 where the Cowessess First Nation is now located, about 85 miles east of Regina, the capital of Saskatchewan.

A search with ground-penetrating radar resulted in 751 ''hits,'' indicating that at least 600 bodies were buried in the area, said Chief Cadmus Delorme of the Cowessess. The radar operators have said their results could have a margin of error of 10%.

"We want to make sure when we tell our story that we're not trying to make numbers sound bigger than they are," Delorme said. "I like to say over 600, just to be assured."

He said the search continues and the radar hits will be assessed by a technical team and the numbers will be verified in coming weeks.

Delorme said that the graves were marked at one time, but that the Roman Catholic Church that operated the school had removed the markers.

On Twitter, Canadian Prime Minister Justin Trudeau said he was "terribly saddened" to learn of the latest discovery.

"My heart breaks for the Cowessess First Nation following the discovery of Indigenous children buried at the former Marieval Residential School," he said, adding that ''we will tell the truth about these injustices."

My heart breaks for the Cowessess First Nation following the discovery of Indigenous children buried at the former Marieval Residential School. We cannot bring them back, but we will honour their memory and we will tell the truth about these injustices. https://t.co/WuxdsixJnx

Don Bolen, Archbishop of Regina, Saskatchewan, posted a letter to the Cowessess First Nation on the archdiocese's website.

"The news is overwhelming and I can only imagine the pain and waves of emotion that you and your people are experiencing right now," Bolen wrote.

Bolen said two years ago he apologized to the Cowessess people for the "failures and sins of Church leaders in the past."

"I know that apologies seem a very small step as the weight of past suffering comes into greater light, but I extend that apology again, and pledge to do what we can to turn that apology into meaningful concrete acts — including assisting in accessing information that will help to provide names and information about those buried in unmarked graves," he said.

"The nuns were very mean to us," she said. "We had to learn how to be Roman Catholic. We couldn't say our own little blessings."

Nuns at the school were "condemning about our people" and the pain inflicted continues generations later, Sparvier said.

"We learned how to not like who we were," she said. "That has gone on and it's still going on.''

More than 200 bodies found at Indigenous school in Canada

The remains of 215 children, some as young as 3 years old, have been found buried on the site of what was once Canada's largest Indigenous residential school — one of the institutions that held children taken from families across the nation.

Last month the remains of 215 children, some as young as 3 years old, were found buried on the site of what was once Canada's largest Indigenous residential school near Kamloops, British Columbia.

Following that discovery, Pope Francis expressed his pain over the discovery and pressed religious and political authorities to shed light on "this sad affair." But he didn't offer the apology sought by First Nations and by the Canadian government.

"An apology is one stage in the way of a healing journey," Delorme said.

"This was a crime against humanity, an assault on First Nations," said Chief Bobby Cameron of the Federation of Sovereign Indigenous First Nations in Saskatchewan. He said he expects more graves will be found on residential school grounds across Canada.

"We will not stop until we find all the bodies," he said.

From the 19th century until the 1970s, more than 150,000 Indigenous children were forced to attend state-funded Christian schools, the majority of them run by Roman Catholic missionary congregations, in a campaign to assimilate them into Canadian society.

The Canadian government has admitted that physical and sexual abuse was rampant in the schools, with students beaten for speaking their native languages.

In the United States, Interior Secretary Deb Haaland announced this week that the federal government is launching an investigation into its past oversight of Native American boarding schools. She said the work will include compiling and reviewing records to identify past schools, locate burial sites and uncover the names and tribal affiliations of students.