Makeshift sheets displaying messages of protest contesting the ability to pay for rent hang in the window of an apartment building, amid the coronavirus disease (COVID-19) outbreak in the Columbia Heights neighbourhood of Washington, U.S., on October 28, 2020. The Biden administration is extending the Centers for Disease Control and Prevention's COVID-19 residential eviction moratorium until July 31. (Tom Brenner, Reuters )

WASHINGTON (Reuters) — The Biden administration on Thursday said it is extending the Centers for Disease Control and Prevention's COVID-19 residential eviction moratorium until July 31.

Reuters first reported the expected extension on Tuesday. The national ban on residential evictions was first implemented last September and was extended in March until June 30. A CDC statement Thursday extending it to July 31 said "this is intended to be the final extension of the moratorium".

The CDC said the "the COVID-19 pandemic has presented a historic threat to the nation's public health. Keeping people in their homes and out of crowded or congregate settings — like homeless shelters — by preventing evictions is a key step in helping to stop the spread of COVID-19."

On Tuesday, a group of 44 U.S. lawmakers had called for the extension, citing an estimate that about "6 million renter households are behind on their rent and at risk of eviction".

The Supreme Court has yet to act on a petition by landlord groups which argued the CDC exceeded its authority when it halted evictions to help renters during the pandemic. The CDC imposed the ban to combat the spread of COVID-19 and prevent homelessness during the pandemic.

Lawyers for the landlord groups cited the Reuters story Wednesday reporting the expected extension in asking the Supreme Court to take immediate action to halt the ban.

The landlords said earlier that property owners "have been losing over $13 billion every month under the moratorium". One group estimated that 40 million Americans were behind on rent in January, with $70 billion of missed payments by the end of 2020.

The moratorium covers renters who expected to earn less than $99,000 a year, or $198,000 for joint filers, or who reported no income, or received stimulus checks. 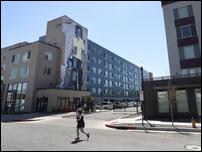 To stave off evictions, Utahns scrape together rent

Melanie Rangel spent the winter holidays darting around her West Jordan kitchen, baking fresh loaves of pumpkin and banana bread adorned with walnuts or chocolate chips. But she didn't bake the treats for the sake of tradition, or to pass the time.

Renters also had to swear they were doing their best to make partial rent payments, and that evictions would likely leave them homeless or force them into "shared" living quarters.

Congress has approved $47 billion in relief for renters but much of that money has not yet been distributed.