ST. GEORGE — After 47 focus group discussions to consider a possible name change for Dixie State University, 65% of participants support a change that does not include the name Dixie, according to results released on Wednesday.

A name that includes Utah emerged as the top theme among six presented to focus group participants. The least favorite theme, by far, was Deseret.

"Sounds strictly like a religious school," one participant said.

"I'm an active Latter-day Saint, and I think it's a terrible idea," said another.

Others said it "looks like a typo" while another said it "would be an immediate turnoff, maybe even more than Dixie."

A report of the focus group findings released Wednesday noted reaction to the Dixie name "ranged from fervent support to passionate opposition, with the majority of participants falling somewhere between the two extremes."

One person who supports a change said the Dixie name is "divisive and controversial." Another noted: "If we had a cleaner history, we wouldn't have the issues with the Dixie name."

Another remarked: "As a student, I don't want to have to spend 10 minutes explaining the history of the name in a job interview or grad school interview."

But supporters said Dixie "has always meant 'welcoming and hospitality,' at least to me."

Others claimed cancel culture was at work.

"We have over a hundred years of history and no one has ever said it was a problem."

Another said, "To me, the term Dixie is sacred."

While Utah was the top pick among the six themes, no specific name with Utah appeared to emerge from the focus groups. One suggested that southwestern or southern Utah be part of the name.

Still another volunteered the name "needs to be the state name plus another identifier." Others said "Utah would give us credibility" and "Having a degree from something 'Utah' would be awesome."

But others said the Utah name would not be unique. Another expressed concern the university "would be perceived as a satellite campus." 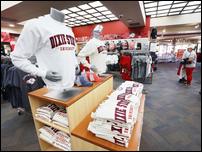 Salt Lake's Love Communications, which conducted the focus groups, recommended setting aside the geologic/geographic and Deseret themes from further consideration.

"Equal passion was expressed by both proponents and opponents of retaining the current name, and yet nearly everyone expressed the same goal — helping the university become nationally regarded while still serving the southern Utah region as an open-enrollment, comprehensive university," the recommendation states.

Responses to the rubric survey reinforced the need to choose a name that will put the institution on its best footing for future success, the document states.

As for the name Dixie, the recommendations question if the current name would fulfill the Utah Legislature's mandate spelled out in HB278. The legislation called for a public process to recommend a name for the institution and forward the name to the Legislature, should the university's trustees and the Utah Board of Higher Education choose to do so.

"Based on all available data as well as the prevailing sentiment from the focus groups and rubrics, we think it would be extremely difficult, if not impossible for the institution to fulfill this mandate into the future with its current name. However, based on the community's support for the term Dixie, we recommend the institution should dedicate additional time to developing ways to honor the region's history and heritage should the term Dixie be removed from the name," the recommendation states.

A proposal to change Dixie State University's name was one of the most contentious issues considered by Utah lawmakers during the 2021 General Session.

HB278 readily passed in the Utah House of Representatives but stalled in the Senate, primarily over concerns that the St. George community had not had sufficient input on the proposed name change.

Lawmakers eventually passed a substituted version of HB278, which was described by legislative leaders as compromise legislation. Unlike the initial bill, which precluded the possibility of keeping the Dixie name, the bill passed by both legislative houses had no such requirement and will appropriate $500,000 for historical preservation on campus if the university trustees and state higher education board members recommend to legislative leaders a name other than Dixie.

Higher education officials are expected to deliver a recommendation to legislative leaders later this year.

Discussions about the university's name have been going on for decades but intensified after protests across the country following George Floyd's murder last summer while in police custody in Minneapolis, spurring a national conversation about racial injustice.

Last summer, DSU administrators commissioned a study by the Cicero Group to consider the impacts of the name. It found the university's name has become "increasingly problematic for our students and alumni" due to racial connotations, and it has hindered the university's ability to recruit students, faculty and staff. Moreover, it has limited its ability to build partnerships and obtain grants and funding.

Critics of the name change proposal say the area became known as Dixie because Latter-day Saint pioneers came to the area to grow crops that were cultivated in the South such as cotton, and the movement to change it is akin to cancel culture.