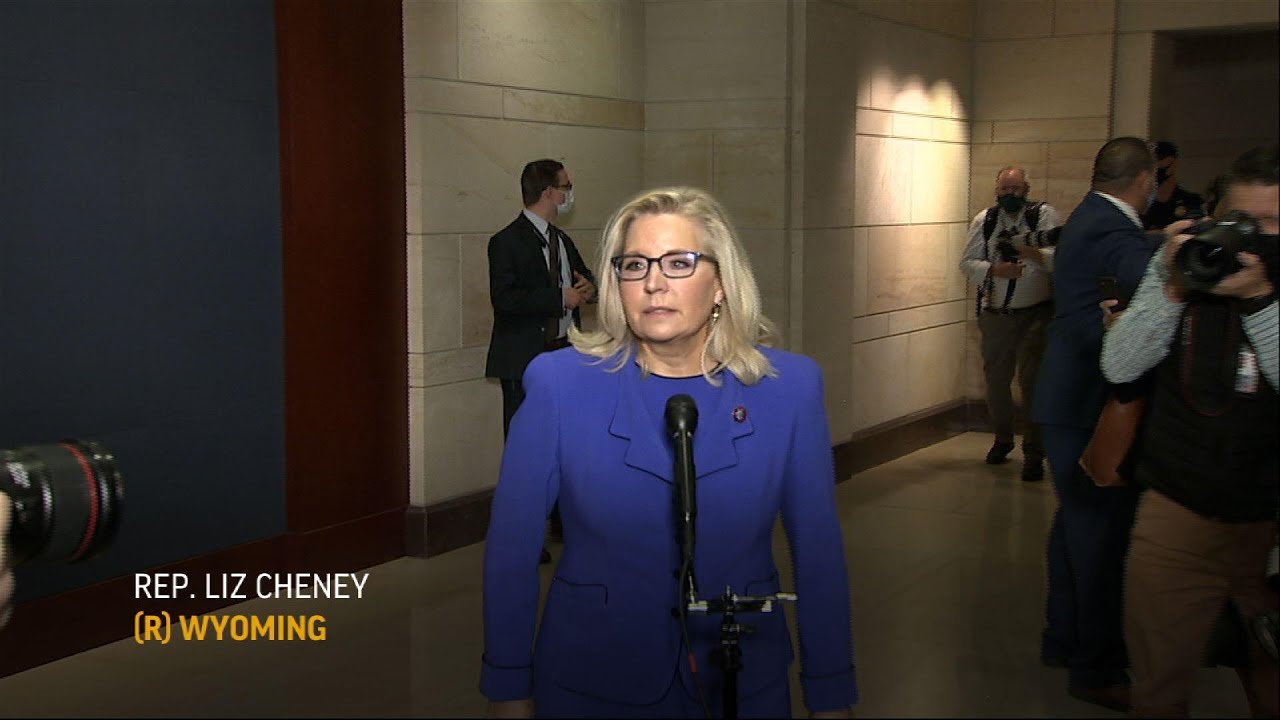 WASHINGTON (AP) — House Republicans ousted Rep. Liz Cheney from her post as the chamber's No. 3 GOP leader on Wednesday, punishing her after she repeatedly rebuked former President Donald Trump for his false claims of election fraud and his role in inciting the Jan. 6 Capitol attack.

Meeting behind closed doors for less than 20 minutes, GOP lawmakers used a voice vote to remove the Wyoming congresswoman from her leadership post, the latest evidence that challenging Trump can be career-threatening.

She was Congress' highest-ranking Republican woman, a daughter of former Vice President Dick Cheney, and her removal marked a jarring turnabout to what's been her fast rise within the party.

Cheney has refused to stop repudiating Trump and defiantly signaled after the meeting that she intended to use her overthrow to try pointing the party away from him.

"I will do everything I can to ensure that the former president never again gets anywhere near the Oval Office," she told reporters.

Cheney's fate had been clear for some time with Trump, House Minority Leader Kevin McCarthy of California and No. 2 GOP leader Steve Scalise of Louisiana all arrayed against her. GOP lawmakers complained that Cheney's offense wasn't her view of Trump but her persistence in publicly expressing it, undermining the unity they want party leaders to display in advance of next year's elections, when they hope to win House control.

Even so, stripping Cheney, 54, of her leadership job stood as a striking, perhaps defining moment for the GOP.

I will do everything I can to ensure that the former president never again gets anywhere near the Oval Office.

One of the nation's two major parties was in effect declaring an extraordinary requirement for admission to its highest ranks: fealty to, or at least silence about, Trump's lie that he lost his November reelection bid due to widespread fraud. In states around the country, officials and judges of both parties found no evidence to support Trump's claims that extensive illegalities caused his defeat.

Cheney's replacement was widely expected to be Rep. Elise Stefanik, R-N.Y., who entered the House in 2015 at age 30, then the youngest woman ever elected to Congress. Stefanik owns a more moderate voting record than Cheney but has evolved into a vigorous Trump defender who's echoed some of his unfounded claims about widespread election cheating.

It was initially unclear when the separate vote on Cheney's replacement would occur.

Wednesday's voice vote averted a specific public gauge of how much support Cheney may have had, though it had become clear that sentiment among the 212 House Republicans was strongly for her removal. Cheney, who did little to try to rally support among her colleagues, made clear that she was plunging ahead on her anti-Trump path.

"We must go forward based on truth," she said. "We cannot both embrace the big lie and embrace the Constitution."

Cheney has told Republicans she intends to remain in Congress and seek reelection next year in her solidly pro-Trump state. The former president has said he'll find a GOP primary challenger to oppose her.

In an audacious signal that she was not backing down, Cheney took to a nearly empty House chamber Tuesday night to deliver an unapologetic four-minute assault on her GOP adversaries and defense of her own position.

"Remaining silent and ignoring the lie emboldens the liar," she said, adding, "I will not sit back and watch in silence while others lead our party down a path that abandons the rule of law and joins the former president's crusade to undermine our democracy."

Many Republicans consider a turn away from Trump to be political suicide and agree with Sen. Lindsey Graham, R-S.C., who's said the allegiance many GOP voters have to the former president is so intense that the party can't succeed without him.

Former President Trump released a statement after Cheney was ousted. "Liz Cheney is a bitter, horrible human being. I watched her yesterday and realized how bad she is for the Republican Party. She has no personality or anything good having to do with politics or our Country. She is a talking point for Democrats, whether that means the Border, the gas lines, inflation, or destroying our economy," Trump said.

She arrived in Congress in 2017 with a well-known brand as an old-school conservative, favoring tax cuts, energy development and an assertive use of U.S. power abroad. By November 2018 she was elected to her current leadership job unopposed and seemed on an ambitious pathway, potentially including runs at becoming speaker, senator or even president.

She occasionally disagreed with Trump during his presidency over issues like the U.S. withdrawal from Syria and his attacks on Dr. Anthony Fauci over the pandemic. But her career hit turbulence in January once she became one of 10 House Republicans to back his second impeachment for inciting his supporters' deadly Capitol assault. The Senate acquitted him.

In a memorable statement before the House impeachment vote, Cheney said: "The president of the United States summoned this mob, assembled the mob, and lit the flame of this attack. Everything that followed was his doing."

Her words — and her pre-vote announcement, which allowed Democrats to cite her opposition during the debate — infuriated many House Trump supporters.

She withstood a February effort to boot her from leadership in a 145-61 secret ballot, with a McCarthy speech on her behalf credited with saving her. That didn't happen this time.

Her district, bordering Canada and Vermont, voted twice for Barack Obama and then twice for Trump in the past four presidential elections. She opposed Trump's trademark 2017 tax cut and his efforts to unilaterally spend billions on his Southwestern border wall.

Stefanik grabbed center stage as a fierce Trump defender in 2019 as the House impeached him over his efforts to pressure Ukraine to produce damaging information about Joe Biden, his Democratic rival. Senate acquittal followed.

While Stefanik has won admiration from Trump, some of Washington's hardest-right conservatives have remained suspicious of her moderate record.

Rep. Chip Roy of Texas, a member of the conservative House Freedom Caucus, wrote colleagues Tuesday chastising "Republicans who campaign as Republicans but then vote for and advance the Democrats' agenda once sworn in."

No Stefanik challenger has yet emerged, and other conservatives like Scalise and Rep. Jim Jordan of Ohio, are in her camp.