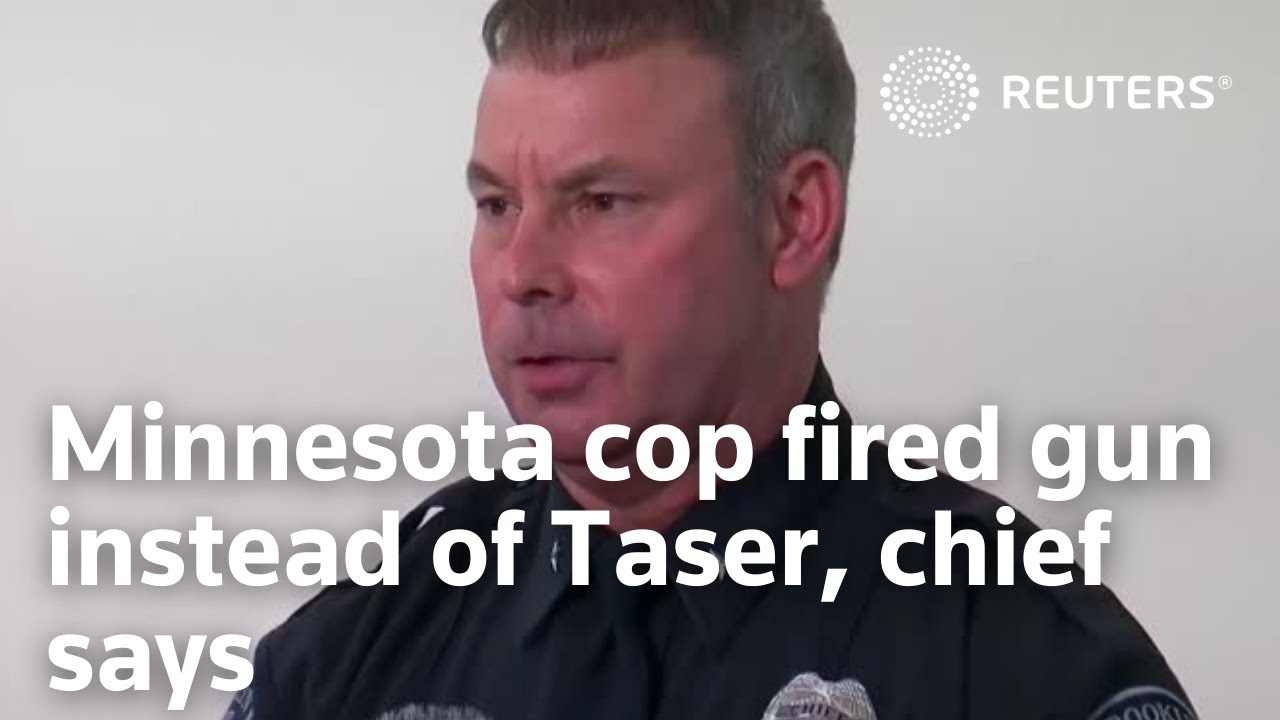 BROOKLYN CENTER, Minn. (Reuters) — The fatal police shooting of a young Black man in a Minneapolis suburb appeared to result from an officer mistakenly opening fire with her gun instead of a Taser in the midst of a struggle during a traffic stop, the city's police chief said on Monday.

Family members of the slain motorist, Daunte Wright, 20, described him as a good-natured father who worked multiple jobs to support his 2-year-old son. They rejected the notion that an accidental shooting was to blame for his death on Sunday.

"My brother lost his life because they were trigger happy," his older half sibling, Dallas Wright, told a crowd of hundreds gathered for an outdoor memorial vigil in the rain on Monday evening at the site of the fatal encounter in Brooklyn Center, Minnesota.

"My heart is broken in a thousand pieces... I miss him so much, and it's only been a day," Daunte Wright's mother, Katie Wright, said as she wept. "He was my life, he was my son and I can never get that back. Because of a mistake? Because of an accident?"

Defying a curfew imposed earlier in the day by Gov. Tim Walz following a night of unrest on Sunday, scores of people headed from the vigil to join hundreds of demonstrators assembling outside the Brooklyn Center police station in a steady downpour as darkness fell.

The crowd surged up against a makeshift fence erected to keep protesters at bay. Some demonstrators threw bottles and other projectiles as police responded by firing what appeared to be non-lethal plastic rounds.

Sunday's shooting and its aftermath roiled a region already on edge. Wright was slain just 10 miles from the courthouse where a former Minneapolis police officer, Derek Chauvin, has stood trial over the past two weeks on murder charges in the deadly arrest last May of George Floyd, a 46-year-old Black man.

Floyd's death, captured by an onlooker's cellphone video showing his neck pinned under Chauvin's knee, sparked months of protests and civil strife in cities across the United States over racial injustice and police brutality.

Unrest flared anew in Brooklyn Center after Wright's killing, with riot police on Sunday night firing teargas and rubber bullets to disperse protesters, some of them lobbing rocks, bags of garbage and other projectiles.

Police and local news media reported looting and burglaries of about 20 businesses at a nearby shopping center.

On Monday, Walz ordered a dusk-to-dawn curfew for the greater Twin Cities area around Minneapolis and St. Paul.

Brooklyn Center Police Chief Tim Gannon told a news briefing earlier that a routine traffic stop escalated into a deadly confrontation when officers ran a check on Wright's expired vehicle registration and found an outstanding warrant for him.

Police video footage presented at the briefing showed an officer trying to handcuff Wright next to the car, before Wright broke free and got back inside his car. At that point, a second officer yells, "Taser, Taser, Taser," before firing a single shot from her handgun, the video shows.

"Holy (expletive), I just shot him," the policewoman is heard to shout as the car rolls away with Wright still in the driver's seat. The car traveled several blocks before striking another vehicle and coming to a stop.

Gannon said the investigation was in its early stages but based on evidence reviewed by the police, the shooting appeared accidental. The unidentified officer who shot Wright was placed on administrative leave.

"This appears to me, from what I viewed and the officers' reaction and distress immediately after, that this was an accidental discharge that resulted in the tragic death of Mr. Wright," he said.

Brooklyn Center Mayor Mike Elliott called for the police officer to be dismissed from the force and said the city council had approved a motion to shift control over the city police department to his office.

"At such a tough time, this will streamline things and establish a chain of command and leadership," Elliott said on Twitter.

The killing in Brooklyn Center, like several other recent high-profile fatal police shootings of Black men, originated with the kind of traffic stop that civil rights activists say has often been used by law enforcement as a form of harassment of minority motorists.

Terri Nelson, legal director of the American Civil Liberties Union of Minnesota, cited a Hennepin County Public Defenders Office report finding that 54% of drivers stopped for minor equipment violations between January and September in 2018 in Minneapolis were Black, though African Americans represent just 19% of the city's population.

Ben Crump, the attorney who helped win a $27 million civil settlement for the Floyd family from the city of Minneapolis, said he was also representing the Wrights.

"Daunte Wright is yet another young Black man killed at the hands of those who have sworn to protect and serve all of us — not just the whitest among us," Crump said in a statement.

Wright's mother told reporters on Sunday she had received a call from her son telling her police had pulled him over for having air fresheners dangling from his rear-view mirror, which is illegal in Minnesota. She could hear police tell her son to get out of the vehicle, she said.

The police chief said "a hanging item from the rear-view mirror" was discovered when police pulled Wright over.

Wright's father, Aubrey, told the Washington Post that his son had dropped out of high school a few years earlier due to a learning disability and had been working various jobs to help support his young son.