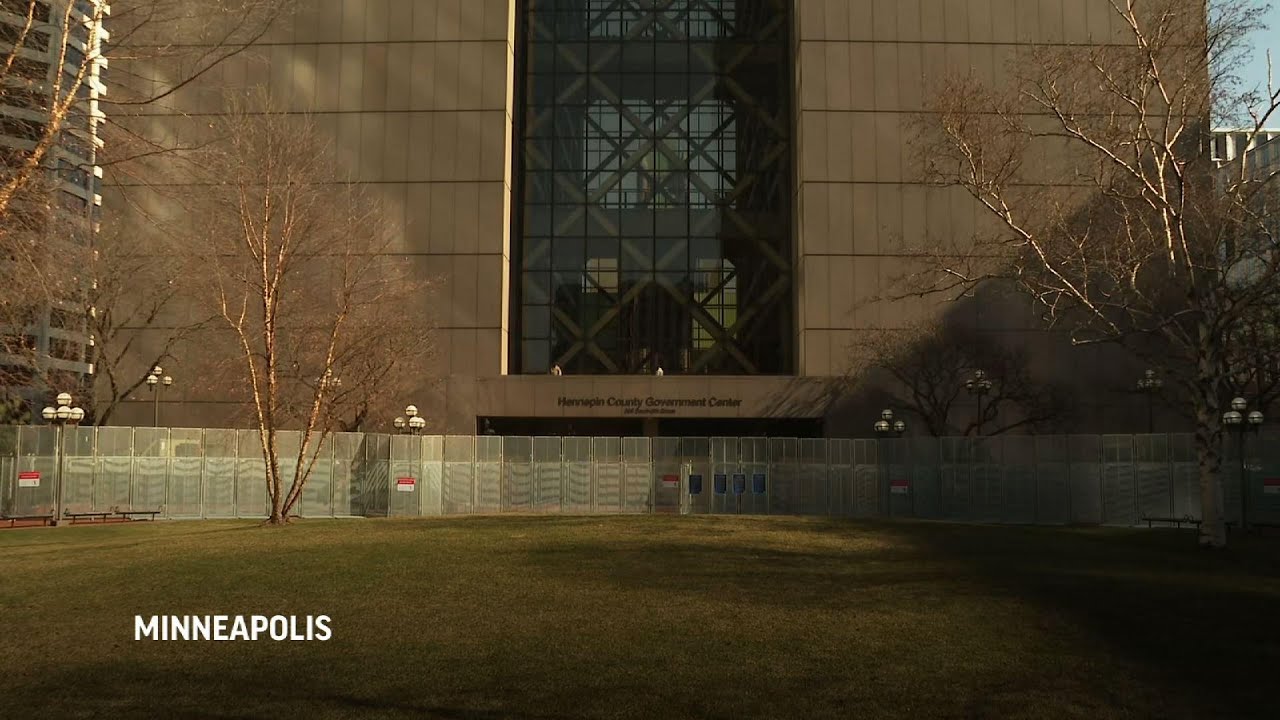 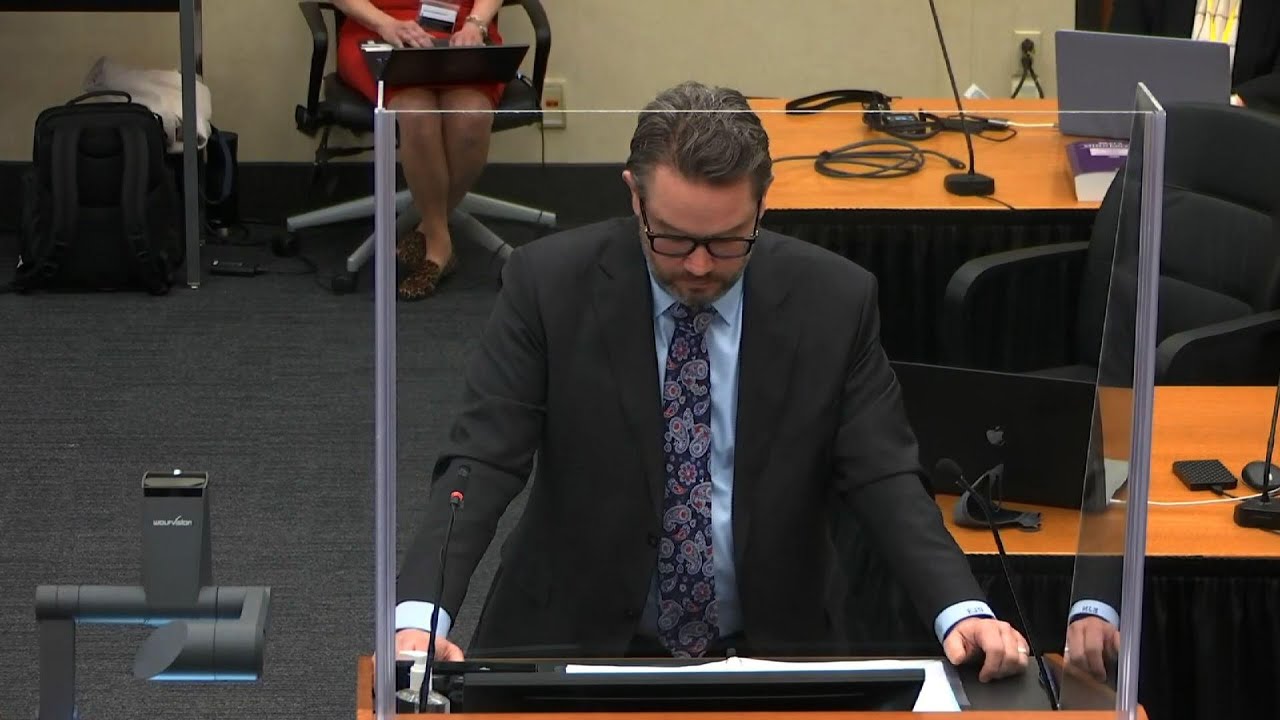 YouTube: Defense: Chauvin did what he was trained to do | Associated Press

MINNEAPOLIS (AP) — The video of George Floyd gasping for breath was essentially Exhibit A as the former Minneapolis police officer who pressed his knee on the Black man's neck went on trial Monday on charges of murder and manslaughter.

Prosecutor Jerry Blackwell showed the jurors the footage at the earliest opportunity, during opening statements, after telling them that the number to remember was 9 minutes, 29 seconds — the amount of time officer Derek Chauvin had Floyd pinned to the pavement last May.

The white officer "didn't let up" even after a handcuffed Floyd said 27 times that he couldn't breathe and went limp, Blackwell said in the case that triggered worldwide protests, scattered violence and national soul-searching over racial justice.

"He put his knees upon his neck and his back, grinding and crushing him, until the very breath — no, ladies and gentlemen —Floyd was fighting efforts to put him in a squad car as the crowd of onlookers around Chauvin and his fellow officers grew and became increasingly hostile, Nelson said. until the very life was squeezed out of him," the prosecutor said.

Chauvin attorney Eric Nelson countered by arguing: "Derek Chauvin did exactly what he had been trained to do over his 19-year career."

Floyd was resisting arrest, and Chauvin arrived to assist other officers who were struggling to get Floyd into a squad car as the crowd around them grew larger and more hostile, Nelson said.

The defense attorney also disputed that Chauvin was to blame for Floyd's death.

Floyd, 46, had none of the telltale signs of asphyxiation and had fentanyl and methamphetamine in his system, Nelson said. He said Floyd's drug use, combined with his heart disease, high blood pressure and the adrenaline flowing through his body, caused a heart rhythm disturbance that killed him.

"There is no political or social cause in this courtroom," Nelson said. "But the evidence is far greater than 9 minutes and 29 seconds."

Blackwell, however, rejected the argument that Floyd's drug use or any underlying health conditions were to blame, saying it was the officer's knee that killed him.

Bystander Donald Williams, who said he was trained in mixed martial arts, including chokeholds, testified that Chauvin appeared to increase the pressure on Floyd's neck several times with a shimmying motion. He said he yelled to the officer that he was cutting off Floyd's blood supply.

Williams recalled that Floyd's voice grew thicker as his breathing became more labored, and he eventually stopped moving. He said he saw Floyd's eyes roll back in his head, likening the sight to fish he had caught earlier that day.

Williams said he saw Floyd "slowly fade away ... like the fish in the bag."

Earlier, Minneapolis police dispatcher Jena Scurry testified that she saw part of Floyd's arrest unfolding via a city surveillance camera and was so disturbed that she called a duty sergeant. Scurry said she grew concerned because the officers hadn't moved after several minutes.

"You can call me a snitch if you want to," Scurry said in her call to the sergeant, which was played in court. She said she wouldn't normally call the sergeant about the use of force because it was beyond the scope of her duties, but "my instincts were telling me that something is wrong."

The video played during opening statements was posted to Facebook by a bystander who witnessed Floyd being arrested after he was accused of trying to pass a counterfeit $20 bill at a convenience store. The footage caused revulsion across the U.S. and beyond and prompted calls for the country to confront racism and police brutality.

Jurors watched intently as the video played on multiple screens, with one drawing a sharp breath as Floyd said he couldn't breathe. Chauvin sat calmly during opening statements and took notes, looking up at the video periodically.

"My stomach hurts. My neck hurts. Everything hurts," Floyd says in the video, and: "I can't breathe, officer." Onlookers repeatedly shout at the officer to get off Floyd, saying he is not moving, breathing or resisting. One woman, identifying herself as a city Fire Department employee, shouts at Chauvin to check Floyd's pulse.

Floyd's cause of death, Chauvin's force will be keys at trial

A Minneapolis police officer was swiftly fired and charged with murder after bystander video showed him pressing his knee into George Floyd's neck, ignoring the man's cries that he couldn't breathe. But even with that powerful footage, legal experts say the case isn't a slam dunk.

The prosecutor said the case was "not about split-second decision-making" by a police officer but excessive force against someone who was handcuffed and not resisting.

Blackwell said the Fire Department employee wanted to help but was warned off by Chauvin, who pointed Mace at her.

"She wanted to check on his pulse, check on Mr. Floyd's well-being," the prosecutor said. "She did her best to intervene. ... She couldn't help."

The timeline differs from the initial account submitted last May by prosecutors, who said Chauvin held his knee on Floyd's neck for 8 minutes, 46 seconds. The time 8:46 soon became a rallying cry in the case. But it was revised during the investigation.

Fourteen jurors or alternates are hearing the case — eight of them white, six of them Black or multiracial, according to the court. Only 12 will deliberate; the judge has not said which two will be alternates.

About a dozen people chanted and carried signs outside the courthouse as Floyd family attorney Ben Crump, the Rev. Al Sharpton and members of the Floyd family went inside. Crump blasted the idea that the trial would be a tough test for jurors.

"We know that if George Floyd was a white American citizen, and he suffered this painful, tortuous death with a police officer's knee on his neck, nobody, nobody, would be saying this is a hard case," he said.

The downtown Minneapolis courthouse has been fortified with concrete barriers, fences and barbed and razor wire. City and state leaders are determined to prevent a repeat of the riots that followed Floyd's death, with National Guard troops already mobilized.

Chauvin's trial is being livestreamed over the objections of the prosecution. Judge Peter Cahill ordered that cameras be allowed largely because of the pandemic and the required social distancing, which left almost no room for spectators in the courtroom.

Find AP's full coverage of the death of George Floyd at: https://apnews.com/hub/death-of-george-floyd