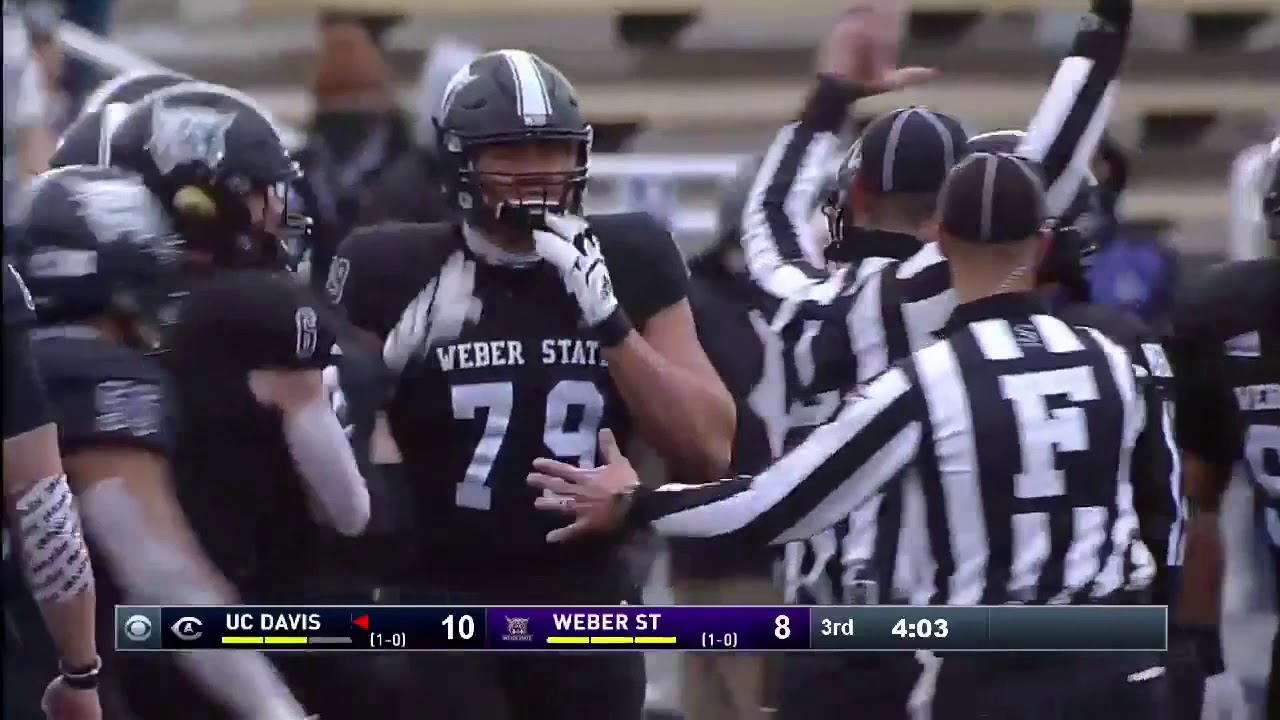 OGDEN — Weber State is good at football. They might be even better at switching the momentum of a game in their favor without even scoring a point.

After being held scoreless in the first half, the Wildcats scored 15 unanswered points in the second half against the visiting UC Davis Aggies to pull away for an 18-13 win at home.

The Wildcats came to play after halftime and the feeling was palpable as they came out of the locker room.

"The people in the locker room, all those guys in there, we knew that first half just wasn't really us," freshman quarterback Bronson Barron said. "So the whole mindset in the locker room was 'Hey, we're fine, we're gonna come out the second half with energy.' And I'd say the biggest thing is if you were around our program you'd see the love that each guy has for each other."

After a nearly scoreless first quarter, UC Davis was able to get on the board when quarterback Hunter Rodrigues connected with tight end McCallan Castles for a 15-yard touchdown to put the Aggies up 7-0; but that would be the only touchdown for the visiting team all game.

The Aggies kicked a field goal to go up 10-0 on the Wildcats right before halftime. But halftime is when everything changed.

Weber State (2-0) started the second half with the ball and went 75 yards over the next six minutes to get within three of UC Davis (1-1). During the drive, the Wildcats found themselves in a fourth-and-1 situation and Josh Davis rushed for a yard to give his team a new set of downs in what felt like a new life.

In the end, Dontae McMillan found the end zone on a 2-yard touchdown run and Weber State went for two. Haze Hadley found an open Logan Snyder to pull the Wildcats within 2 points of the Aggies.

"They come out and have a seven minute drive that results in a touchdown and makes it a 2-point game, defense just fed off of that," senior safety Preston Smith said. "They got 3 points in the second half — that was on some iffy stuff that we can easily fix. We come out, we execute."

On the very next drive, Weber State got a huge stop thanks to Smith and his ability to be in the right position at the right time.

UC Davis decided to go for it on fourth-and-2 and faked it to running back Ulonzo Gilliam, but it was Rodrigues who had the ball. But Smith came up with the huge stop that gave the Wildcats great field position.

"Coach Hill called the play," Smith said. "It was 100% the play call. I was just in the right position at the right time to make it and I made it. So it was the play call, they kept doing it with the QB keeper — fourth-and-1, fourth-and-2 — that's what they're gonna do, especially with our ends crashing down. It's just the play call that coach Hill put in and it worked out."

Two plays later, Weber State went up 15-10 to score 15 unanswered points in the second half. Barron connected with Ty MacPherson on a 35-yard catch, and then on the next drive Daniel Wright rushed for a 10-yard touchdown. Barron finished the game throwing for 126 yards on 13-of-29 passing.

Weber State will have another bye week coming up and will host Northern Arizona on Saturday, March 27 at 1:00 P.M. MT.