Arianne Brown: Images of a fit-raged toddler show life has a way of imitating life

His long, blond hair was pulled halfway up, and little ringlets had formed around his face showcasing his natural curls.

As much as Ace was not loving having a camera in his face, I had to take the picture because teenage boy good-hair days are hard to come by. Moms must document these things.

There was one problem, and it was a big one.

The moment I put my camera in focus, my 3-year-old son came in screaming at the top of his lungs. The screaming was due to a fit he was throwing from an incident a few minutes earlier that I neglected to resolve (because he was inconsolable). As it turned out, said 3-year-old was upset when I unbuckled him from his car seat instead of his favorite-at-the-time older brother. His disdain for me as the unbuckler apparently ran pretty deep.

As any good big brother would do, my 14-year-old scooped his little brother up and held him, dashing any hope of me getting the picture I was after.

"I can work with this," I thought. "I'll just crop the toddler out."

But the crying did not subside because the 3-year-old was too deep in the fit to stop. I'm actually not sure if he remembered why he started crying in the first place.

In my stubbornness to get the photo I was after, I kept snapping away, hoping for a good one I could work with to show the world (or my meager number of "followers") the good hair day my handsome teen was having.

The fit eventually subsided with the loving embrace of a big, strong older brother, and I was left to look at the photos I had accumulated.

In one photo, I saw what I was looking for: those magnificent ringlets. Try as I may to crop out my angry toddler, it was impossible; he was there in all his fitful glory. But there was another picture that depicted my son holding his little brother, and all you could see was love. And of course, I couldn't help but have several images of a red-faced toddler raging against the world around him.

When I saw the pictures of my fit-filled 3-year-old, the frustration I built up toward him was gone and I was able to see it for what it was. No, his actions were not justified. In fact, nobody — not even a toddler — in his right mind could be justified for the behavior he was demonstrating.

Yet, as I looked at the picture, I felt compassion. Even in his wrong-mindedness, I knew that little boy's ultimate goal was to feel loved and to be at peace in his own perceived happiness.

With each moment immortalized by my camera that January evening, it told a story – each angle holding a piece to the complete truth. My caption that day for my social media friends to view did not end up being about hair, but in stead said in part, the following:

"Each angle tells a different story, but none are false. Each holds truth — the biggest of those truths is that they each ultimately want happiness to be the end result.

"With all of today's turmoil, I believe the same holds true.

"Angles can be deceiving, but each one holds a measure of truth.

"I know that when it is all said and done, we all want peace, love and happiness as our end result."

As you may know by now, the above story is not just about good hair, a loving brother, an irrational toddler, or even a photo-driven mother. This story is about us — because life imitates life as well as it imitates life, and we each want our life to emulate happiness. 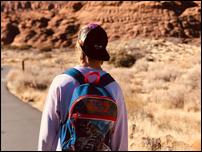 2021 will be the year of tomorrows

The year 2020, for me at least, was the year time stood still. While there were both positives and negatives to this reality, I am determined that 2021 will be different, despite few world changes. It will be the year of tomorrows.
×