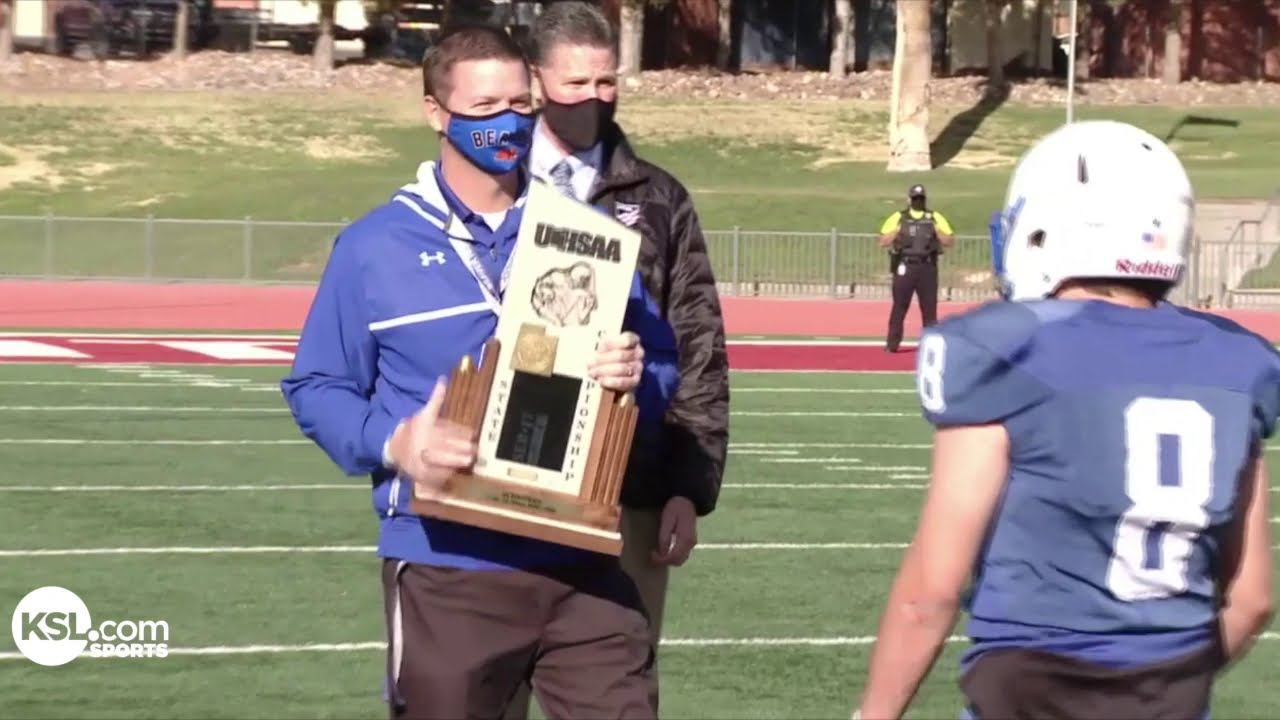 ST. GEORGE — Treyson Hunter only had three completions in the first half.

He made good use of each one, though.

The Beaver quarterback threw for three of his five touchdowns before the break, leading the Beavers to a 42-0 shutout win over Duchesne for their second-straight Class 2A state title Saturday afternoon at Greater Zion Stadium in St. George.

Beaver coach Jon Marshall doesn't expect his quarterbacks to throw the ball 50 times per game. But he expects them to be ready when they're number is called.

"When the opportunity comes to throw the ball, he's got to be ready to go," Marshall told CentraCom. "He's had a great year so far, but one of the great things for our quarterbacks is they haven't had to throw a lot because of our ability to run the football.

"Hopefully he's going to have a great game."

That he did. Hunter completed 8-of-10 passes for 110 yards and touchdowns to five different receivers.

EJ Allred ran for 125 yards for the Beavers (13-0), and also caught a 15-yard slant from Hunter among his three catches for 52 yards. Creyton Hollingshead, Statler Wright, Hunter Carter and Ky Brown each added a touchdown catch, and Turner Williams scored on a 1-yard run in the third quarter for the Beavers (13-0).

In a season that almost wasn't and played during a global pandemic, Beaver played every game like it was their last. The Beavers outscored their opponents 636-180, with an average margin of victory of 35.1 points. No team got closer than 42-20 win over Grantsville on Sept. 18, when the Cowboys were held to just six points in the second half.

A dominant defense paired with a high-scoring offense led to one of the more impressive seasons in state history, at any level of competition.

With 22 seniors on the roster, the Beavers capped a perfect season with their second state title in as many years, extending their winning streak to 26-straight games. Beaver, which won its 13th title in school history, hasn't lost since a 10-0 loss to Grand in the 1A state semifinals in 2018.

Beaver QB Treyson Hunter has 🖐 TD passes to 🖐 different receivers in the 2A championship.

"It's been very unique, very strange," Marshall said in describing a week filled with COVID-19 tests to determine the health and availability of players, cheerleaders, coaching staff and more. "The early part of the week was very difficult, not knowing if we would have anybody who would miss this game. We got past it on Wednesday, so hopefully the kids were a bit more relaxed.

"We're playing for a state championship; most teams never get that chance. What I want for both teams is to be able to play to the best of their abilities. Kids need to play; I'm a big believer in that … I will defend our ability for kids to play whatever their sport as much as they can. We all need it, and it's great to be here."

Only one player tested positive for the virus between the two teams, both coaches said, and that was a reserve player with Duchesne. Still, the circumstances surrounding the testing procedures and protocols were, if nothing else, unique.

Hunter threw his third touchdown pass of the first half, rolling out for a 6-yard strike to Statler Wright with just under four minutes left until halftime.

It wasn't just the offense, though. Beaver opened the game with a sack from Wright, and Ky Brown's interception that set up Hunter's third TD kept the Duchesne offense in check en route to a 21-0 halftime lead.

Caleb Robinson added a second-half interception for the Beavers, who held previously unbeaten Duchesne to just 52 yards of offense.