'It's so important for us to be unified': Utah Jazz, Pelicans kneel during national anthem before NBA restart 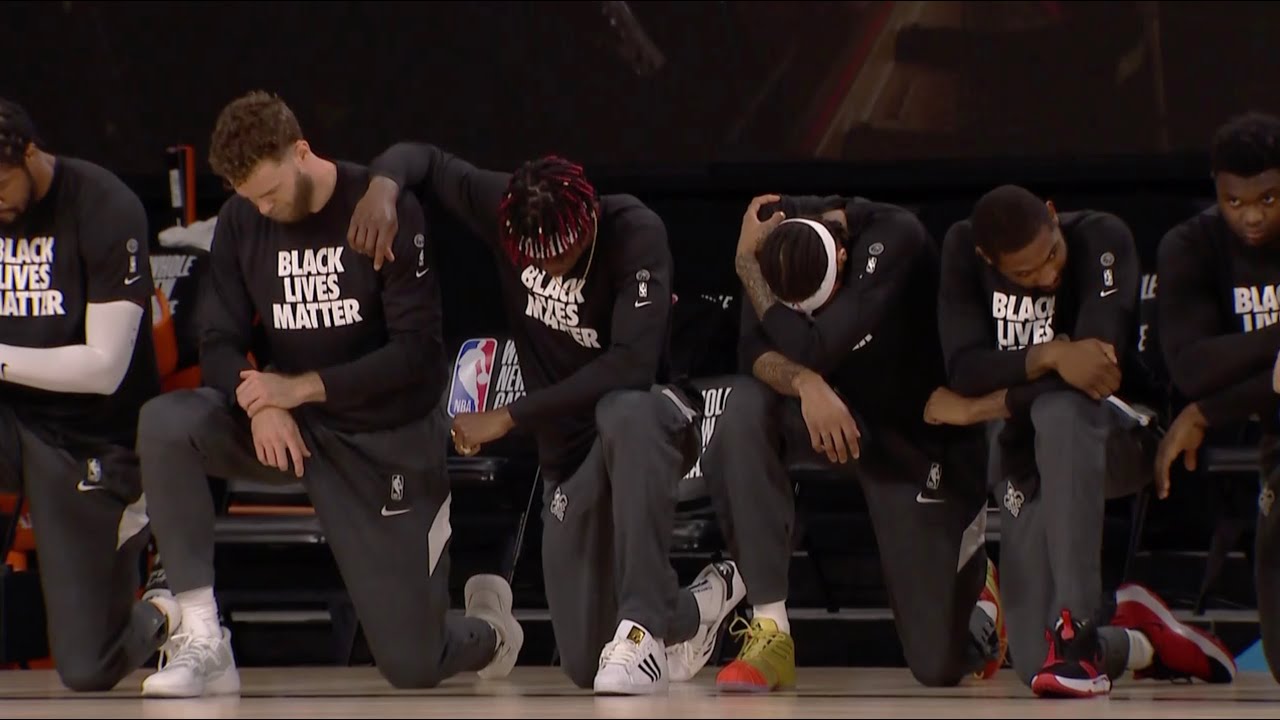 SALT LAKE CITY — Donovan Mitchell arrived at the first NBA game in over four months hoping to make a statement. And not just on the court. The Jazz's young All-Star entered HP Field House in Lake Buena Vista, Florida, wearing a bulletproof vest. On the vest were dozens of names — people who were victims of police brutality.

"The game was great, won by two, but at the end of the day, Breonna Taylor's killers are still free," Mitchell said following the Jazz's 106-104 win over the Pelicans. "There are so many different things that we can honestly talk about; I'm gonna continue to talk about Breonna Taylor because that's near and dear to me."

Mitchell sent a personal message with his wardrobe. The teams sent a unified one prior to tipoff.

For over four minutes, players and staff from the Utah Jazz and New Orleans stood along the entire length of the sideline where the words “Black Lives Matter” were emblazoned on the court.

Then, right before a recorded version of the national anthem was played, each player, each coach and each referee took a knee.

Before the first NBA game in 141 days was played, the teams reminded the world that even as the season begins again, they are going to continue to push for change. The decision to kneel and stand along the "Black Lives Matter" mark on the court was made after player meetings. The players wanted to find something that not only would draw attention to issues that are important to them, but also find something that everyone could participate in.

“It's so important, at this point, for us to be unified, and to be able to peacefully protest many of the critical things that are going on in our country right now,” Jazz coach Quin Snyder said before the game. “So tonight, there's an opportunity to do that and to continue to draw and bring awareness to many of the challenges in terms of racial and social justice.”

That attention was one of the reasons many players agreed to participate in the NBA’s bubble experiment in the ESPN Wide World of Sports Complex near Orlando, Fla. The league informed them they could use the platform that the NBA restart would provide to continue to advocate for social change. Many players — including Jazz players Jordan Clarkson and Nigel Williams-Goss — participated in peaceful protests and marches in the months leading up to the season restarting.

The NBA is allowing players to wear special messages to replace their names on their back of their jerseys and “Black Lives Matter” is painted on each playing surface in the bubble. Players have also asked reporters to continue asking social justice questions, giving them a chance to share their voice on the topics. Most, though, haven’t needed a question — with Snyder and Mitchell being just two of many coaches and players who have started media availabilities advocating change and education.

And the Utah coaches and players have the organization’s full support.

“The Utah Jazz are committed to advancing social justice and stand in support of the players, coaches and staff as they exercise their First Amendment rights, and use their voices, their experiences, and their platforms to peacefully express themselves,” a statement from the Utah Jazz said. “We are a values-based organization and believe in the foundational principles of justice, equality, fairness, and economic empowerment. Our organization strives to be a unifying force in our communities, and we hope this time in our history can be a catalyst for positive change in a country we love.”