SALT LAKE CITY — The Utah Jazz had a disappointing exit to the 2018-19 NBA season, falling once again to the Houston Rockets in five games.

Having made the second round of the playoffs each of the last two seasons, the Jazz appeared poised — based on an additional season of internal development — to better challenge a Rockets team in this year's playoffs.

In each of the two previous postseason trips, the Jazz were a lower-seeded team but found a way to win one of the first two series' games on the road. This gave them home-court advantage with trips back to Salt Lake City.

But this year, not only were the Jazz unable to win one of the first two games at Houston, they lost by a combined 52 points. For reference, the Jazz's four second-round losses last season came by a combined 58 points.

Jazz General Manager Dennis Lindsey now faces a tough offseason of questions. Despite winning 50 games this season — a two-win improvement over last year — the Jazz made an earlier and uglier playoff exit.

The problems the Jazz had when free agency opened up in July of 2018 — a lack of shooting and playmakers on the wing — were painfully obvious again in the spring of 2019. Donovan Mitchell, who struggled shooting the ball against Houston, was often bogged down by trap defenses anytime he got inside the 3-point line, and the roster’s supporting players were unable to make Houston pay for their pressure against the second-year guard.

Coach Quin Snyder was questioned for his radical defensive approach against James Harden, shielding the reigning MVP’s left hand while giving up open driving lanes; but ultimately, the defense worked and limited Harden to 8 points below his season average.

The Jazz defense finished as the second best in the NBA behind only the Milwaukee Bucks, and they'll likely remain around that spot as long as Rudy Gobert keeps his name in the Defensive Player of the Year conversation.

To improve, though, the Jazz must find more offensive weapons to support their stellar defense, and they’re going to have to make a series of tough decisions with players already on the roster if they want to get here.

The Jazz will have to decide what to do with Ricky Rubio first. It was widely reported at the NBA trade deadline that Rubio was on the market for the Jazz, specifically in trade talks with the Memphis Grizzlies.

While Rubio wasn’t solely to blame for the Jazz's postseason loss to the Rockets and has performed admirably in the playoffs in a Jazz uniform, his inconsistent regular-season play is partly to blame for the Jazz finding themselves on the wrong side of home court advantage in the playoffs each of the last two years. Rubio will likely be looking for a starting opportunity and a contract similar to his current one that is near $15 million per year deal. 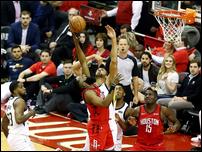 Ben Anderson: Jazz lost Game 1 at the trade deadline, not on Sunday

The Utah Jazz game plan came up short on Sunday night, but no game plan would have taken down this Rockets team. The Jazz simply aren't talented enough.

Derrick Favors has a team option for the 2019-20 season, meaning the Jazz can choose to keep the longest-tenured played around for one more season at nearly $17 million a year, waive him and open up the cap space to be spent on a potential free agent, or trade him to take back a player on a similar contract.

Currently, the Jazz have 13 players under contract for next season, with Thabo Sefolosha, Ekpe Udoh, and Rubio coming off the books. The Jazz also have a team option for Kyle Korver, who alluded to a potential retirement during the team’s postseason media session. Even if the Jazz were to add a player in June’s NBA draft, they’ll likely be a player or two short of a full roster going into next season.

To fill the roster completely, the Jazz will have to make at least a few roster moves. Whether they’re willing to make an aggressive decision to improve the roster this summer falls on the shoulders of the Jazz front office. Traditionally, blockbuster moves haven’t fit this management's mode of operation.

Most recently, the Jazz were reportedly unwilling to match the asking price for Grizzlies guard Mike Conley during February’s trade deadline. Last summer, the Jazz had upward of $20 million of cap space to spend and could have created more by waiving Sefolosha, Udoh, and Royce O’Neale; but they chose to retain those players and use their cap space to sign Favors and Dante Exum to big extensions.

Outside of inking an aging Joe Johnson in 2016, the Jazz haven’t signed a major free agent under this management regime. While the Jazz could have as much as $30 million to spend this offseason it's questionable whether they'll show a willingness to spend money on outside free agents or prefer to bet on continuity and retain a player like Rubio with their cap space.

The Jazz have money to spend this season; and with Rubio’s contract coming off the books they’ll have at least $15 million, and could have upward of $30 million depending on their decision with Favors. The Jazz could spend that money to make a major upgrade to the roster or split it up between several players; traditionally, the Jazz have preferred to keep their money in-house.

For now, it's uncertain whether the Jazz will stay the course the front office has bet on or choose to go against the grain by making a splash on the free-agency market.

Note:At this time we are unable to display all comments approved for this story, and have closed it to additional comments. We apologize for the inconvenience.

Ben Anderson is a sports contributor for KSL.com. Follow him on Twitter @BensHoops. Listen to him 2-6 p.m., Monday through Friday with Kyle Gunther on ESPN 700.