SALT LAKE CITY — University of Utah head coach Larry Krystkowiak has a history of standing up in front of the media and proclaiming that he has nothing to fear from the impending FBI investigation into illegal college basketball recruiting tactics.

Even after former Ute Kyle Kuzma’s name showed up on a balance sheet titled “Loan to players” compiled by former NBA agent Andy Miller and his agency ASM Sports, Krystkowiak doubled down, saying, “There’s nothing NCAA-wise illegal within our program.”

Technically, Krystkowiak may be correct. If neither Krystkowiak nor his coaches or affiliates at the University of Utah lent Kuzma money, nor knew about the transaction, it’s hard to fault the school directly for these types of transgressions. These allegations don’t break any laws either, though they constitute a violation of the NCAA bylaws.

The same goes for Dave Rose and the BYU basketball program. Junior guard Nick Emery left the program before the season began while being investigated for receiving impermissible benefits from a member of BYU’s Cougar Club donor network. Emery cited personal distress amid a recent divorce as the reason for his withdrawal.

But whether Utah or BYU knew of the violations shouldn’t necessarily be the focus of any NCAA investigation. It’s that two relatively unknown basketball players on unremarkable teams were allegedly able to draw these types of benefits.

Don’t get me wrong. Since leaving Utah, Kuzma has had a meteoric rise with the Los Angeles Lakers and is showing the type of talent that appears to go hand in hand with these illegal recruiting tactics. But he rarely showed that at Utah. Kuzma sneaked into the very end of the first round of the NBA draft and was projected by most experts to be a second round pick right up to the draft. While he surely would have earned a living playing professionally in Europe, he was far from a sure thing.

Emery, while an above-average sophomore, was even further from playing professionally when he was reported to have received these benefits. 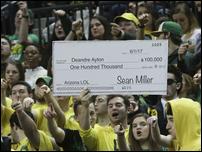 Lorenzo Romar has no idea how long he'll be in charge at Arizona.

While college basketball will focus closely on projected lottery pick Deandre Ayton’s reported $100,000 price tag to sign with the Arizona Wildcats, it’s the lower-level transactions that should worry the NCAA.

Cutting the head off this nefarious recruiting snake shouldn’t be difficult and may be cured simply by the NBA allowing players to enter the NBA draft immediately after high school. Rather than preventing these athletes from becoming millionaires by forcing them to go through the artificial motions of being a student-athlete during the basketball season, the players could simply earn their money without using college as a middle man.

But true student athletes like Emery and Kuzma potentially drawing benefits not because of the money they would return to the donors or agents as professionals, but simply because of their college celebrity, may hint that this problem has grown bigger than the NCAA’s control.

With the growing visibility of college athletes, even at non-basketball powerhouses like Utah and BYU, the desire to reward these players by individuals not associated with the schools will grow as well. Whether that’s from donors, or agents who see the small financial investment as a worthy long-term gamble, these types of relationships are likely to continue, and as the NCAA has already shown, will be difficult to police.

While some may want to debate the morality of athletes seeking to benefit financially from their college celebrity, the recent reports involving local players show just how far beyond the NCAA’s control these relationships have become. Whether these engagements are right or wrong, it appears the NCAA either doesn’t have the interest or the ability to enforce its own rules.