WASHINGTON (AP) — The White House is embarking on a major campaign to turn public opinion against the nation's largely family-based immigration system ahead of an all-out push next year to move toward a more merit-based structure.

The administration was laying the groundwork for such a drive even before an Islamic State-inspired extremist who was born in Bangladesh tried to blow himself up in Midtown Manhattan on Monday. It is assembling data to bolster the argument that the current legal immigration system is not only ill-conceived, but dangerous and damaging to U.S. workers.

"We believe that data drives policy, and this data will help drive votes," said White House spokesman Hogan Gidley, for what the administration considers, "common sense America-first immigration controls the president has proposed."

White House officials outlined their strategy this week exclusively to The Associated Press, and said the data demonstrates that changes are needed immediately. But their effort will play out in a difficult political climate, as even Republicans in Congress are leery of engaging in a major immigration debate ahead of the 2018 midterm elections.

The issue is expected to be prominently featured in the president's Jan. 30 State of the Union address. The White House also plans other statements by the president, appearances by Cabinet officials and a push to stress the issue in conservative media.

The administration was beginning its campaign Thursday with a blog post stressing key numbers: Department of Homeland Security data that shows nearly 9.3 million of the roughly 13 million total immigrants to the U.S. from 2005 to 2016 were following family members already in the United States. And just one in 15 immigrants admitted in the last decade by green card entered the country because of their skills.

Other planned releases: a report highlighting the number of immigrants in U.S. jails, assessments of the immigration court backlog and delays in processing asylum cases, and a paper on what the administration says is a nexus between immigration and terrorism.

Critics have questioned the administration's selective use of sometimes misleading data in the past.

The proposed move away from family-based immigration would represent the most radical change to the U.S. immigration system in 30 years. It would end what critics and the White House refer to as "chain migration," in which immigrants are allowed to bring a chain of family members to the country, and replace it with a points-based system that favors education and job potential — "merit" measures that have increasingly been embraced by some other countries, including Britain.

Gidley said that for those looking to make the case that the U.S. is ill-served by the current system, "transparency is their best friend."

The public is sharply divided on the types of changes President Donald Trump is advocating.

A Quinnipiac University poll in August found that 48 percent of voters opposed a proposal that Trump has backed to cut the number of future legal immigrants in half and give priority to immigrants with job skills rather than those with family ties in this country. Forty-four percent of those polled — including 68 percent of Republicans — supported the idea.

The White House hopes to see Congress begin to take up the issue early in 2018 — though it has yet to begin discussions with congressional leaders over even the broad strokes of a legislative strategy, officials said.

Trump has laid out general principles for what he would like to see in an immigration bill in exchange for giving legal status to more than 700,000 young people brought to the U.S. illegally as children. These include the construction of a border wall, tougher enforcement measures and moving to a more merit-based legal immigration system. In September, Trump gave Congress six months to come up with a legislative fix to allow the young immigrants known as "Dreamers" to stay in the country, creating an early-2018 crisis point he hopes will force Democrats to swallow some of his hardline demands. 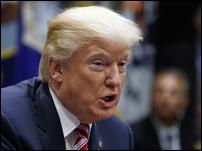 Roused by the first major ISIS-inspired attack on U.S. soil since he took office, President Donald Trump urged swift repeal of an immigration program that brought the suspect to America and laid into a political foe he said was responsible for it — though Republican George H. W. Bush signed the law.

After Monday's incident in New York and the truck attack there in October, DHS quickly released information on the suspects' immigration statuses, and Trump amplified his calls for ending the two programs that brought them to the U.S.

For those who have been pushing for an end to chain migration for decades, it's a welcome push.

The Federation for American Immigration Reform, or FAIR, which advocates for lower immigration levels, among other changes, recently began a national radio campaign warning of what it sees as the dangers of chain migration and the diversity visa lottery program. The group has spent close to $1 million over the last month and a half on its campaign.

And NumbersUSA, another group that advocates for lower immigration levels, launched a national six-figure ad campaign Thursday "to educate on Chain Migration categories."

Guillermo Cantor, research director at the American Immigration Council, counters that the administration is ignoring the benefits of a family-focused immigration system and the values that drove the country to adopt it in the first place.

Research, he said, has shown that allowing immigrants to reunite with their families is one of the best integration tools. And family members bring their own skills, as well as support networks and other benefits, such as help with child care.

"This is a society that's founded on family values," Cantor said, arguing that, for many who have become citizens or legal residents, reuniting with siblings and other extended family members is crucial.